Not to be confused with Lincoln Day 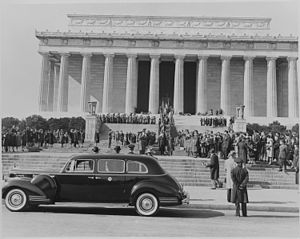 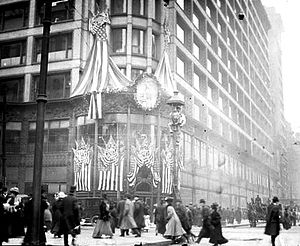 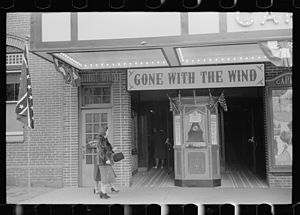 Flags of the Confederacy displayed at a movie house on Lincoln's birthday in Winchester, Virginia in February 1940

Lincoln's Birthday is a legal holiday in some U.S. states, observed on the anniversary of Abraham Lincoln's birth on February 12, 1809. Arizona, California,[1] Connecticut,[2] Illinois,[3] Indiana,[4] Missouri, and New York observe the holiday. New Jersey formerly observed the holiday, but on September 29, 2008, the Senate and General Assembly of New Jersey enacted The Public Employee Pension and Benefits Reform Act of 2008 (Section 36 of P.L.1995, c.259 (C.52:14-17.31a)) eliminating Lincoln's Birthday as a public holiday for the purposes of conducting State government business, an act which also amended and supplemented various parts of retirement and other benefits for certain public employees.[5]

The earliest known observance of Lincoln's birthday occurred in Buffalo, New York, in 1874. Julius Francis (d. 1881), a Buffalo druggist, made it his life's mission to honor the slain president. He repeatedly petitioned Congress to establish Lincoln's birthday as a legal holiday.[6]

The day is marked by traditional wreath-laying ceremonies at Abraham Lincoln Birthplace National Historic Site in Hodgenville, Kentucky, and at the Lincoln Memorial in Washington, D.C.. The latter has been the site of a ceremony ever since the Memorial was dedicated. Since that event in 1922, observances continue to be organized by the Lincoln Birthday National Commemorative Committee and by the Military Order of the Loyal Legion of the United States (MOLLUS). A wreath is laid on behalf of the President of the United States, a custom also carried out at the grave sites of all deceased U.S. presidents on their birthdays. Lincoln's tomb is in Springfield, Illinois.

As part of Lincoln's birthday bicentennial, the U.S. Mint released four new pennies. The commemorative coins have new designs on the reverse showing stages of his life. The first went into circulation on September 12, 2009. The standard portrait of Lincoln's head remains on the front. The new designs include a log cabin representing his birthplace, Lincoln as a young man reading while sitting on a log that he was taking a break from splitting, Lincoln as a state legislator in front of the Illinois Capitol, and the partially built dome of the U.S. Capitol.[7]

Black History Month has its origin in 19th Century celebrations of Lincoln's Birthday by African-American communities in the United States.[8] By the early 20th Century, black communities were annually celebrating Lincoln's birthday in conjunction with the birthday of former slave and abolitionist Frederick Douglass on February 14.[8] The precursor to Black History Month was created in 1926 when historian Carter G. Woodson and the Association for the Study of Negro Life and History announced that the second week of February would be "Negro History Week" to coincide with the traditional Black commemorations of both men's birthdays.[8] By the 1970s, "Negro History Week" had become "Black History Month".[8] Black History Month has expanded further to Canada, where it is also celebrated in February, and to the United Kingdom, which celebrates it in October.

Lincoln's Birthday was never a U.S. Federal Government holiday. The third Monday in February remains only "Washington's Birthday" in Federal Law. However, many state governments have officially renamed their Washington's Birthday state holiday as "Presidents' Day", "Washington and Lincoln Day", or other such designations which explicitly or implicitly celebrate Lincoln's birthday. Regardless of the official name and purpose, celebrations and commemorations on or about the third Monday often include honoring Lincoln.

In California,[9] Connecticut, Missouri, and Illinois, while Washington's Birthday is a federal holiday, Lincoln's Birthday is still a state holiday, falling on February 12 regardless of the day of the week.

In the following states, third Monday in February is an official state holiday and known as:

Washington and another person