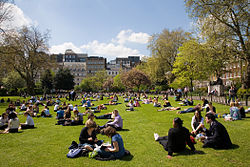 Lincoln's Inn Fields is the largest public square in London. It was laid out in the 1630s under the initiative of the speculative builder and contractor William Newton, "the first in a long series of entrepreneurs who took a hand in developing London", as Sir Nikolaus Pevsner observes.[1] The original plan for "laying out and planting" these fields, drawn by the hand of Inigo Jones, was said still to be seen in Lord Pembroke's collection at Wilton House in the 19th century,[2] but is untraced.[3] The grounds, which had remained private property, were acquired by London County Council in 1895. It is today managed by the London Borough of Camden and forms part of the southern boundary of that borough with the City of Westminster.

Lincoln's Inn Fields takes its name from the adjacent Lincoln's Inn, of which the private gardens are separated from the Fields by a perimeter wall and a large gatehouse.

The grassed area in the centre of the Fields contains a court for tennis and netball and a bandstand. It was previously used for corporate events, but these are no longer permitted. Cricket and other sports are thought to have been played here in the 18th century.

When originally laid out, Lincoln's Inn Fields was part of fashionable London. The completion of the houses that surrounded it proceeded at a leisurely pace, interrupted by the English Civil War: In 1659 James Cooper, Robert Henley, and Francis Finch and other owners of "certain parcels of ground in the fields, commonly called Lincoln's Inn Fields", were exempted from all forfeitures and penalties which they might incur in regard to any new buildings they might erect on three sides of the same fields, previously to the 1st of October in that year, provided that they paid for the public service one year's full value for every such house within one month of its erection; and provided that they should convey the 'residue of the said fields' to the Society of Lincoln's Inn, for laying the same into walks for common use and benefit, whereby the annoyances which formerly have been in the same fields will be taken away, and passengers there for the future better secured."[4] The oldest building from this early period is Lindsey House, 59–60 Lincoln's Inn Fields, which was built in 1640 and has been attributed to Inigo Jones.[5] The builder may have been David Cunningham, 1st Baronet of Auchinhervie, a friend of the mason-sculptor Nicholas Stone, who also supervised the rebuilding of Berkhamsted Place for Charles I.[6] It derives its name from a period of ownership in the 18th century by the earls of Lindsey.[7] 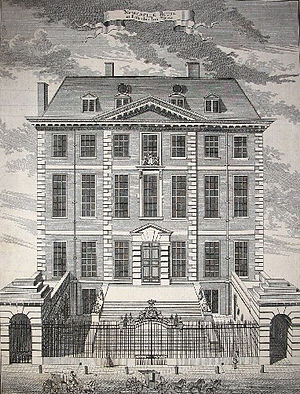 Another seventeenth century survival is now 66 Lincoln's Inn Fields, which was built for Lord Powis and known as Powis House. The charter of the Bank of England was sealed there on 27 July 1694. It was in 1705 acquired by the Duke of Newcastle (whereupon it became known as Newcastle House) who had it remodelled by Sir John Vanbrugh (following earlier work by Sir Christopher Wren after a fire in 1684). It remains substantially in its circa 1700 form, although a remodelling in 1930 by Sir Edwin Lutyens gives it a curiously pastiche appearance.

As London fashion moved west, Lincoln's Inn Fields was left to rich lawyers who were attracted by its proximity to the Inns of Court. Thus, the former Newcastle House became in 1790 the premises of the solicitors Farrer & Co who are still there: their clients include much of the landed gentry and also Queen Elizabeth II.

The Lincoln's Inn Fields Theatre was located in the Fields from 1661 to 1848 when it was demolished. Originally called the Duke's Theatre, it was created by converting Lisle's Tennis Court, to become the Lincoln's Inn Fields Theatre in 1695. The theatre presented the first paid public performances of Purcell's Dido and Aeneas in 1700, John Gay's The Beggar's Opera in January 1728, and Handel's final two operas in 1740 and 1741.

Lincoln's Inn Fields was the site, in 1683, of the public beheading of Lord William Russell, son of the first Duke of Bedford, following his implication in the Rye House Plot for the attempted assassination of King Charles II. The executioner was Jack Ketch who made such a poor job of it that four axe blows were required before the head was separated from the body and, after the first stroke, Russell looked up and said to him "You dog, did I give you 10 guineas to use me so inhumanely?".

In Charles Dickens' novel Bleak House, the sinister solicitor to the aristocracy, Mr Tulkinghorn, has his offices in Lincoln's Inn Fields, and one of its most dramatic scenes is set there. The description of his building corresponds most closely to Lindsey House. After a spell as a patent agents, Lindsey House has become home to the leading civil liberties barristers' chambers, Garden Court Chambers, together with the neighbouring building at 57–58, which includes some features designed by Sir John Soane, including a geometric staircase.[8] 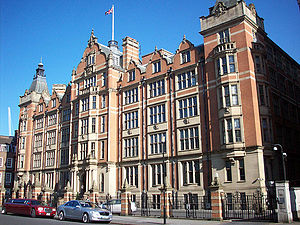 Aside from Linsey House and Powis House, at number 13, on the north side of the square, is Sir John Soane's Museum, home of the architect. On the same side, at number 7, is Thomas More Chambers, led by Mr Geoffrey Cox QC MP.[9] Organisations with premises on the south side of the square include Cancer Research UK's London Research Institute and the Royal College of Surgeons (including the Hunterian Museum exhibiting the intriguing medical collections of John Hunter). There is a blue plaque marking the home of the surgeon William Marsden at number 65. On the west side, the London School of Economics and Political Science owns 50 Lincoln's Inn Fields and has new premises at Stuart House, which opened in September 2008, as well as offices and a medical centre at Sardinia House[10] It has also recently purchased the Land Registry Building at 32 Lincoln's Inn Fields for academic purposes, and will take ownership of 44 Lincoln's Inn Fields in 2015. Aside from the Royal College of Surgeons, the School will then own the entire south side of the square. There is a statue by Barry Flanagan, an abstract called Camdonian, in the North East corner of the square. Also located at 67–69 is the Centre for Commercial Law Studies, the commercial law research and teaching centre of Queen Mary, University of London. 16 Lincoln's Inn Field is occupied by the PR company Brunswick Group, owned by Sir Alan Parker.

During the Muslim holy month of Ramadan, Muslims attend the Fields at sunset to feed the local homeless.[12]

The nearest London Underground stations are Holborn and Chancery Lane.