Lincoln University has a student population from more than 60 countries.[2] Its primary campus is situated on 50 hectares (123 acres) of land located about 15 km (9 mi) outside the city of Christchurch in Lincoln, Canterbury. 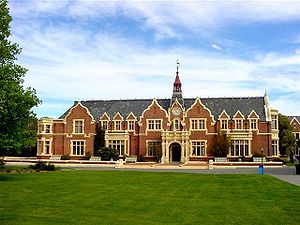 Lincoln University began life in 1878 as a School of Agriculture. From 1896 to 1961 it served students under the name "Canterbury Agricultural College", and offered qualifications of the University of New Zealand until that institution's demise. From 1961 to 1990, it was known as Lincoln College, a constituent college of the University of Canterbury, until achieving autonomy in 1990 as Lincoln University.[3] It is the oldest agricultural teaching institution in the Southern Hemisphere. It remains the smallest university in New Zealand and one of the 8 government universities.[4] 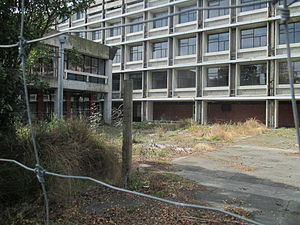 Earthquake damage to Lincoln University, sustained in the 2011 Christchurch earthquake

In March 2009 AgResearch announced that it planned to merge with Lincoln University,[5] an idea that was later scaled back to "sharing of knowledge".

On 18 November 2010, after a period of consultation,[6] it was confirmed that a merger between Lincoln University and Telford Rural Polytechnic would go ahead, with the merger taking effect on 1 January 2011.[7]

On 18 June 2013, a new blue-print for the Selwyn campus was announced [8] which included the "Lincoln Hub" concept previously announced by the Government on 29 April 2013.[9]

Lincoln University Students' Association also referred to as LUSA has been active on campus since 1919.[10] LUSA acts as a representative for students on university policy, as well as providing advocacy services to students and running campus events such as the annual Garden Party and O-Week.