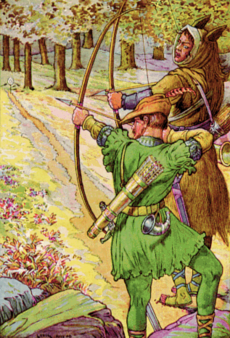 Robin Hood in Lincoln green clothes from a 1912 story book

For the area of Leeds, see Lincoln Green.

Lincoln green is the colour of dyed woollen cloth associated with Robin Hood and his merry men in Sherwood Forest, Nottinghamshire.[1] The dyers of Lincoln, a cloth town in the high Middle Ages, produced the cloth by dyeing it with woad (Isatis tinctoria) to give it a strong blue, then overdyeing it yellow with weld (Reseda luteola)[2] or dyers' broom, Genista tinctoria.[3] "Coventry blue" and "Kendall green" were also colours linked with the dyers of English towns.[citation needed]

The colour is a deep warm olive green.[citation needed]

The first recorded use of Lincoln green as a colour name in English was in 1510.[4]

By the late sixteenth century, Lincoln green was a thing of the past, for Michael Drayton provided a sidenote in his Poly-Olbion (published 1612): "Lincoln anciently dyed the best green in England."[5] Cloth of Lincoln green was more pleasing than undyed shepherd's gray cloth: "When they were clothed in Lyncolne grene they kest away their gray", according to A Lytell Geste of Robyn Hode, ca 1510,[6] and Lincoln green betokened an old-fashioned forester even in the fancy dress of Edmund Spenser's The Faery Queene:

"All in a woodman's jacket he was clad
of Lincolne Greene, belay'd with silver lace."

The popular ballad printed in the eighteenth-century compilations Robin Hood's Garland offers an unexpected picture of Robin as he presented himself at court:

He cloathed his men in Lincoln green

And himself in scarlet red"[7]

The distinction was in the cost of scarlet, which was dyed with kermes, derived from an insect native to the Mediterranean. Lincoln scarlet, from its imported dyestuff, was more expensive than Lincoln green. In 1198 the Sheriff of Lincoln bought ninety ells (about 112 yards) of scarlet cloth for £30 (6s 8d per ell); although the cloth was a finely finished fabric, its high price was almost certainly due mainly to the extremely costly dye-stuff, greyne (graine)[8] from Kermes or scarlet grain. In 1182 the Sheriff of Lincoln bought Scarlet at 6s 8d/ell, Green and Blanchet both at 3s/ell and Gray at approximately 1s 8d/ell. By 1216 three guilds controlling the cloth trade were established in Lincoln, the Weavers', Dyers', and Fullers' guilds.[9]

Sir Walter Scott in his 1820 classical novel Ivanhoe mentioned Lincoln green three times - Chapters VII: "“One of these, a stout well-set yeoman, arrayed in Lincoln green, having twelve arrows stuck in his belt,” [10] Also in Chapters XV and XXXIII. The colour appears used in the dystopian novel Shades of Grey 1: The Road to High Saffron by Jasper Fforde, in which shades of green — and Lincoln green in particular — have narcotic effects.[11]