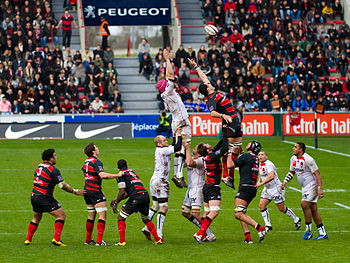 Line-out, Toulouse vs. Lyon OU, in a Top 14 match at Stade Ernest-Wallon

A line-out or lineout is a means by which, in rugby union, play is restarted after the ball has gone into touch. When the ball goes out of the field of play, the opposing team is normally awarded a line-out; the exception is after the ball is kicked into touch from a penalty kick, when the team that was awarded the penalty throws into the line-out.

A line-out is one of the two methods of restarting play after the ball has gone into touch, the other is the "quick throw-in" (sometimes referred to as a quick line-out). Due to the specific rules placed on quick throw-ins they are uncommon in a rugby match with the majority of restarts from touch taking the form of a line-out.

A player in the line-out will attempt either to catch the ball or to knock it back to a "receiver", a player from their own side (often the scrum-half but sometimes another forward) who is standing close to the line-out on their side of the pitch and in a position to receive such a ball. Each team may have, at most, one receiver at a line-out.[3]

The line-out was originally contested with both teams jumping unsupported to retrieve the ball. However, lifting in the line-out was later introduced under Law 19 of the IRB rules.

Wales (red) win a lineout against England in the 2004 Six Nations Championship. England have chosen not to compete for the ball in the air, but are ready to drive into the ball carrier when he lands.

In this line attacking line-out, France (blue) threatens on the 5 metre line, and the Welsh defence mass to stop the drive. Note that the non-throwing hooker (#2, Red) is obliged to stand within 5 metres of the touch line. Six Nations, 2004

Players must not interfere with the opposition during the line-out.[5] In particular, they must not interfere with or tackle a jumper while his feet are off the ground, or interfere with players supporting him; such actions are deemed to be dangerous play and will be penalised with a penalty kick.[5] Players in the line-out must not close the gap or enter the gap, except in the act of jumping for the ball, nor may they jump or support a jumper before the ball is thrown; such actions are penalised with a free-kick.[5] Penalty kicks and free kicks are awarded 15 metres infield from the touch-line.

Players from the side not throwing may jump to compete for the ball, though they must be careful not to attract a penalty for interfering with an opposing jumper. Alternatively, they may choose not to contest the line-out but to drive onto the catcher as soon as he returns to the ground. Often, when a team is awarded a line-out close to their opponent's goal-line, they will attempt to form a maul around the catcher and drive over the goal-line to score a try. In such cases, the defending team will often seek to disrupt this tactic by driving in on the catcher, taking him to ground immediately, before a maul can form.

Teams usually employ a line-out code, to ensure that all players on that team know what is planned, who the ball will be thrown to, what that player will do with it, and what follow-up ploy is intended. One player from the throwing team is usually designated to shout the code, and it is particularly important that the thrower should know what the code is, so that he can execute the throw as intended.