Radar schematic of a LEWP. This shape is a single wave along the pattern, for real LEWPs this shape is tessellated repeatedly in a linear fashion 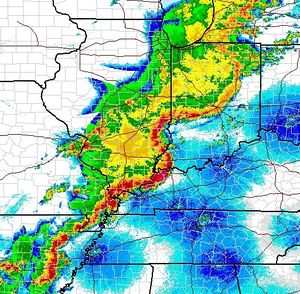 A LEWP in Illinois/Indiana and Arkansas, associated with a very large derecho

A line echo wave pattern (LEWP) is a weather radar formation in which a single line of thunderstorms presenting multiple bow echoes forms south (or equatorward) of a mesoscale low-pressure area with a rotating "head".[1] LEWP often are associated with a multiple-bow serial derecho[2] and often produce tornadoes, some of which can be strong.[3] The existence of a LEWP on radar means that a serial derecho has developed or is likely to develop soon, much as a hook echo indicates the same for a tornado.

A LEWP, according to the NWAS, is defined as "a squall line that has developed into a wave-like pattern due to acceleration at one end of the line and deceleration along the portion immediately adjacent."[4]

A LEWP is an extension of the concept of the bow echo, which usually indicates a powerful convective windstorm. Areas hit by the apices of bows often see the worst weather, with the highest winds and very heavy rain. However, if the sides of the bows reach enough of an orientation parallel to the derecho's movement, a very long-duration heavy rain event can result, leading to flash flooding. A serial derecho can be in the form of a LEWP or a single, very large bow echo.[5]