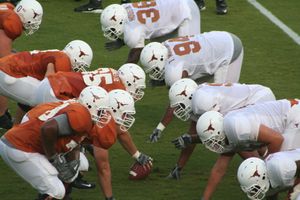 American football line of scrimmage, prior to a play 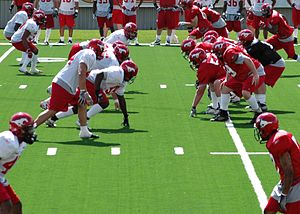 Canadian football line of scrimmage, prior to a play

In American and Canadian football, a line of scrimmage is an imaginary transverse line (across the width of the football field) beyond which a team cannot cross until the next play has begun. Its location is based on the spot where the ball is placed after the end of the most recent play and following the assessment of any penalty yards.

A line of scrimmage is parallel to the goal lines and touches one edge of the ball where it sits on the ground prior to the snap. Under NFL, NCAA, and NFHS rules, there are actually two lines of scrimmage at the outset of each play: one that restricts the offense and one that restricts the defense. The area between the two lines (representing the length of the ball as extended to both sidelines) is called the neutral zone. Only the center, the offensive player who snaps the ball, is allowed to have any part of his body in the neutral zone. In order for there to be a legal beginning of a play, a certain number of the players on the offensive team, including certain eligible receivers, must be at, on or within a few inches off their line of scrimmage.

In Canadian football, the team on defense must line up no nearer than a yard to the line of scrimmage. In American football, they must only be beyond the line.

Modern video techniques[1] enable broadcasts of American football to display a visible line on the screen representing the line of scrimmage. The line is tapered according to camera angle and gets occluded by players and other objects as if the line were painted on the field. The line may represent the line of scrimmage or the minimum distance that the ball must be moved for the offensive team to achieve a first down.