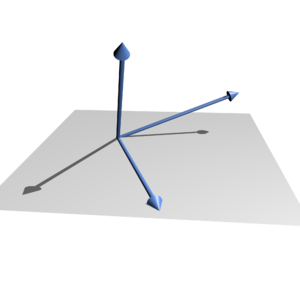 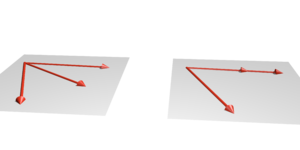 Linearly dependent vectors in a plane in R3.

where zero denotes the zero vector.

Notice that if not all of the scalars are zero, then at least one is non-zero, say a1, in which case this equation can be written in the form

Thus, v1 is shown to be a linear combination of the remaining vectors.

The vectors in a set T={v1,v2,...,vn} are said to be linearly independent if the equation

In order to allow the number of linearly independent vectors in a vector space to be countably infinite, it is useful to define linear dependence as follows. More generally, let V be a vector space over a field K, and let {vi | i∈I} be a family of elements of V. The family is linearly dependent over K if there exists a family {aj | j∈J} of elements of K, not all zero, such that

where the index set J is a nonempty, finite subset of I.

A set of vectors which is linearly independent and spans some vector space, forms a basis for that vector space. For example, the vector space of all polynomials in x over the reals has the (infinite) subset {1, x, x2, ...} as a basis.

A geographic example may help to clarify the concept of linear independence. A person describing the location of a certain place might say, "It is 3 miles north and 4 miles east of here." This is sufficient information to describe the location, because the geographic coordinate system may be considered as a 2-dimensional vector space (ignoring altitude and the curvature of the Earth's surface). The person might add, "The place is 5 miles northeast of here." Although this last statement is true, it is not necessary.

In this example the "3 miles north" vector and the "4 miles east" vector are linearly independent. That is to say, the north vector cannot be described in terms of the east vector, and vice versa. The third "5 miles northeast" vector is a linear combination of the other two vectors, and it makes the set of vectors linearly dependent, that is, one of the three vectors is unnecessary.

Row reduce this matrix equation by subtracting the first equation from the second to obtain,

Continue the row reduction by (i) dividing the second equation by 5, and then (ii) multiplying by 3 and adding to the first equation, that is

We can now rearrange this equation to obtain

In order to determine if the three vectors in R4,

Row reduce this equation to obtain,

Rearrange to solve for v3 and obtain,

This equation is easily solved to define non-zero ai,

where a3 can be chosen arbitrarily. Thus, the vectors v1, v2 and v3 are linearly dependent.

An alternative method uses the fact that n vectors in

are linearly independent if and only if the determinant of the matrix formed by taking the vectors as its columns is non-zero.

In this case, the matrix formed by the vectors is

We may write a linear combination of the columns as

We are interested in whether AΛ = 0 for some nonzero vector Λ. This depends on the determinant of A, which is

Otherwise, suppose we have m vectors of n coordinates, with m < n. Then A is an n×m matrix and Λ is a column vector with m entries, and we are again interested in AΛ = 0. As we saw previously, this is equivalent to a list of n equations. Consider the first m rows of A, the first m equations; any solution of the full list of equations must also be true of the reduced list. In fact, if 〈i1,...,im〉 is any list of m rows, then the equation must be true for those rows.

Furthermore, the reverse is true. That is, we can test whether the m vectors are linearly dependent by testing whether

for all possible lists of m rows. (In case m = n, this requires only one determinant, as above. If m > n, then it is a theorem that the vectors must be linearly dependent.) This fact is valuable for theory; in practical calculations more efficient methods are available.

Let V = Rn and consider the following elements in V, known as the natural basis vectors:

Let V be the vector space of all functions of a real variable t. Then the functions et and e2t in V are linearly independent.

Suppose a and b are two real numbers such that

for all values of t. We need to show that a = 0 and b = 0. In order to do this, we divide through by et (which is never zero) and subtract to obtain

In other words, the function bet must be independent of t, which only occurs when b = 0. It follows that a is also zero.

If such a linear dependence exists, then the n vectors are linearly dependent. It makes sense to identify two linear dependences if one arises as a non-zero multiple of the other, because in this case the two describe the same linear relationship among the vectors. Under this identification, the set of all linear dependences among v1, ...., vn is a projective space.

The covariance is sometimes called a measure of "linear dependence" between two random variables. That does not mean the same thing as in the context of linear algebra. When the covariance is normalized, one obtains the correlation matrix. From it, one can obtain the Pearson coefficient, which gives the goodness of the fit for the best possible linear function describing the relation between the variables. In this sense covariance is a linear gauge of dependence.