A links is the oldest style of golf course, first developed in Britain. The word "links" comes via the Scots language from the Old English word hlinc : "rising ground, ridge"[1] and refers to an area of coastal sand dunes and sometimes to open parkland. Linksland is typically characterised by dunes, an undulating surface, and a sandy soil unsuitable for arable farming but which readily supports various indigenous browntop bents and red fescue grasses, that result in the firm turf associated with links courses and the 'running' game.[clarification needed] It also retains this more general meaning in the Scottish English dialect. It can be treated as singular even though it has an "s" at the end and occurs in place names that precede the development of golf, for example Lundin Links, Fife.[2] 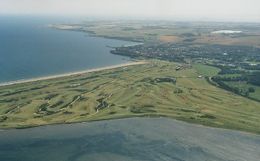 Links courses tend to be on, or at least very near to, a coast, and the term is typically associated with coastal courses, often amid dunes, with few water hazards and few, if any, trees. This reflects both the nature of the scenery where the sport happened to originate and the fact that only limited resources were available to golf course architects at the time and any moving of soil had to be done by hand, so it was kept to a minimum. Even today, some links courses do not employ a greens staff, use only basic machinery such as hole cutters without boards to ensure that the hole is cut unevenly, and use grazing animals to keep the grass cropped.[citation needed]

Although the term links is often considered synonymous with any golf course, few golf courses have all of the design elements of true links courses, including being built on linksland[citation needed]. The presence of a seaside location does not guarantee a links golf course.[citation needed] Many famous courses that claim to be links do not have all of the necessary characteristics (e.g., Pebble Beach Golf Links, Old Head Golf Links at Kinsale, The Ocean Course at Kiawah Island)[citation needed]. On the other hand, some courses located hundreds of miles from a coast can have all of the characteristics of a seaside links except for proximity to water. One notable example of such a course is Sand Hills Golf Club, located in the midst of the Sand Hills of Nebraska.[3]

Links courses remain most common in Ireland and Great Britain, especially in Scotland. The Open Championship is always played on links courses, and this is one of the main features which differentiates it from the three major championships held in the United States. The first exception to this was the 2004 PGA Championship, which was played on a true links course, Whistling Straits, located near Kohler, Wisconsin.[4] The 2015 U.S. Open was played at Chambers Bay, a British links-style course in University Place, Washington.

The style of play on a links golf course is considerably different from the style of play on other types of courses. The challenges of links golf fall into two categories: Firstly, the nature of the courses themselves, which tend to be characterized by uneven fairways, thick rough, and small, deep bunkers known as "pot bunkers"; and secondly, due to their coastal location and lack of trees, many links courses are frequently windy. This affects the style of play required, favoring players who are able to play low accurate shots. As many links courses consist of an "outward" nine in one direction along the coast, and an "inward" nine which returns in the opposite direction, players often have to cope with opposite wind patterns in each half of their round. As a result, successful links golfers learn to control the trajectory of their shots by playing a lower ball flight. Greens on links courses tend to be free of fronting hazards, allowing golfers to bounce the golf ball into the green, rather than hitting high approach shots with strong backspin.