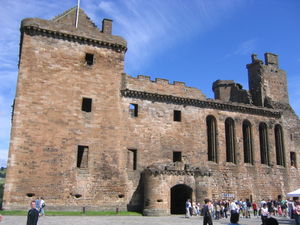 The south face of Linlithgow Palace 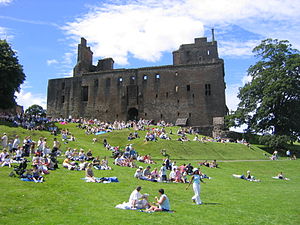 Linlithgow Palace from the east 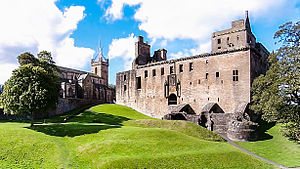 St. Michael's Church and Linlithgow Palace from the Peel 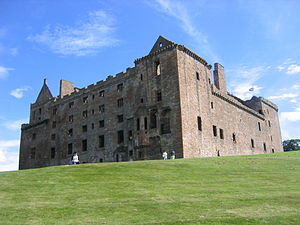 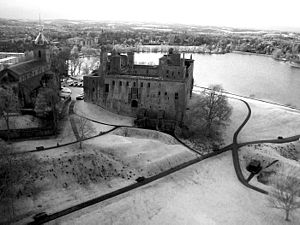 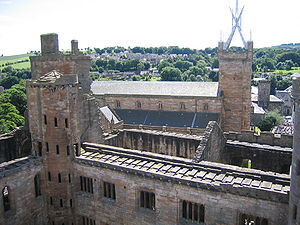 St Michael's Church with its modern crown steeple, viewed across part of the palace. 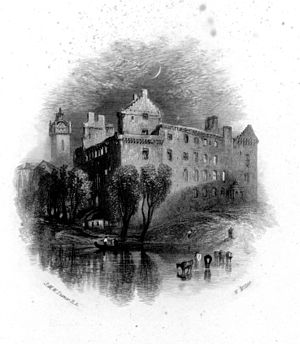 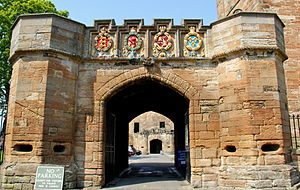 The fore entrance to Linlithgow Palace, built by King James V around 1533 gave access to the outer enclosure surrounding the palace 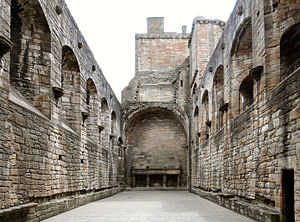 The ruins of Linlithgow Palace are situated in the town of Linlithgow, West Lothian, Scotland, 15 miles (24 km) west of Edinburgh. The palace was one of the principal residences of the monarchs of Scotland in the 15th and 16th centuries. Although maintained after Scotland's monarchs left for England in 1603, the palace was little used, and was burned out in 1746. It is now a visitor attraction in the care of Historic Scotland.

A royal manor existed on the site in the 12th century.[1] This was replaced by a fortification known as 'the Peel', built in the 14th century by occupying English forces under Edward I. The site of the manor made it an ideal military base for securing the supply routes between Edinburgh Castle and Stirling Castle. The English fort was begun in March 1302 under the supervision of two priests, Richard de Wynepol and Henry de Graundeston. The architect Master James of St George was also present.[2] In September 1302, sixty men and 140 women helped dig the ditches; the men were paid twopence and the women a penny daily.[3] A hundred-foot soldiers were still employed as labourers on the castle in November and work continued during the Summer of 1303.[4]

In 1424, the town of Linlithgow was partially destroyed in a great fire.[5] King James I started the rebuilding of the Palace as a grand residence for Scottish royalty, also beginning the rebuilding of the Church of St Michael immediately to the south of the palace: the earlier church had been used as a storeroom during Edward's occupation.[6] Over the following century the palace developed into a formal courtyard structure, with significant additions by James III and James IV. James V, who was born in the palace in April 1512, added the outer gateway and the elaborate courtyard fountain. The stonework of the South façade was renewed and unified for James V in the 1530s by the keeper, James Hamilton of Finnart. Mary, Queen of Scots, was born at the Palace in December 1542[7] and occasionally stayed there during her reign. The daughter of James VI, Elizabeth of Bohemia, lived in the Palace.[8] After the Union of the Crowns in 1603 the Royal Court became largely based in England and Linlithgow was used very little. The old North range collapsed on 6 September 1607, and the Earl of Linlithgow wrote to James VI with the news:

Please your most Sacred Majestie; this sext of September, betuixt thre and four in the morning, the north quarter of your Majesties Palice of Linlithgw is fallin, rufe and all, within the wallis, to the ground; but the wallis ar standing yit, bot lukis everie moment when the inner wall sall fall and brek your Majesties fontane."[9]

King James had it rebuilt between 1618 and 1622. The carving was designed by the mason William Wallace. In July 1620, the architect James Murray of Kilbaberton, estimated that 3000 stones in weight of lead would be needed to cover the roof, costing £3600 in Scottish money.[10] On 5 July 1621 the Earl of Mar wrote to James to tell him he had met Murray and viewed the works at 'grate lenthe.' He said the Palace would be ready for the king at Michaelmas.[11] The carving at the window-heads and the royal arms were painted and gilded, and the old statues of the Pope, Knight, and Labouring Man on the east side had also been painted.[12] However, the only reigning monarch to stay at Linlithgow after that date was King Charles I who spent a night there in 1633.

In 1648, part of the new North range was occupied by the Earl of Linlithgow.[13] An English visitor in October 1641 recorded in a poem that the roof of the great hall was already gone, the fountain vandalised by those who objected on religious grounds to the motto "God Save the King," but some woodcarving remained in the Chapel Royal.[14]

The palace's swansong came in September 1745, when Bonnie Prince Charlie visited Linlithgow on his march south but did not stay overnight. It is said that the fountain was made to flow with wine in his honour.[15] The Duke of Cumberland's army destroyed most of the palace buildings by burning in January 1746.

Keepers and Captains of the Palace

The positions of official keeper and captain of the palace have been held by; James Hamilton of Finnart, 1534, Captain and Keeper; William Danielstoun from 19 November 1540; Andrew Hamilton in Briggis, from 22 August 1543; Andrew Melville of Murdocairney, later Lord Melville of Monimail, brother of James Melville of Halhill, from 15 February 1567; George Boyd, deputy Captain, 1564; Andrew Ferrier, Captain of the Palace, 1565, Frenchman; John Brown, June 1569; Andrew Lambie, June 1571; Ludovic Bellenden of Auchnoul 22 November 1587. The office was acquired by Alexander, 2nd Earl of Linlithgow, and remained in that family until 1715 when the rights returned to the crown.[16]

The palace has been actively conserved since the early 19th century and is today managed and maintained by Historic Scotland. The site is open to visitors all year round, usually subject to an entrance fee for non-members, but on occasion the entry fee is waived during the organisation's "Doors open days".[17] In summer the adjacent 15th-century parish church of St Michael is open for visitors, allowing a combined visit to two of Scotland's finest surviving medieval buildings.

Historic Scotland is running an experiment with junior tour guides. Using young people (primary 6-7) from the nearby school Linlithgow Primary, schools can arrange tours by these young people. During the summer young people from both the primary school and Linlithgow Academy can volunteer to conduct these tours.[citation needed]

A Strathspey for bagpipes was composed in honour of Linlithgow Palace.[18]

The Palace is said to be haunted by the spectre of Mary of Guise, mother to Mary, Queen of Scots.[19]

On 2 December 2012, Chanel held its tenth Métiers d’Art show in the palace. The collection, designed by Karl Lagerfeld was called 'Paris-Edimbourg' and inspired by Scottish style using tartan fabrics. The show renewed media interest in the possibility of restoring the roof of the palace.[20]

In August 2014 a music festival was held on the palace's ground called 'Party at the Palace'. Another Party at The Palace will take place in August 2015.