Lion is a beverage and food company that operates in Australia and New Zealand and produces and markets a range of beer, wine, cider, RTDs, spirits, plain and flavoured milks, yogurts, cheese, juice and soy products. Lion was formed in October 2009 under the name ‘Lion Nathan National Foods’, when Kirin Holdings Company Limited purchased brewer Lion Nathan[1] and merged the business with National Foods which it owned since 2007. In 2011, it changed its name to Lion. The company employs over 7000 people.

The company was formed in 1988 with the merger of LD Nathan & Co and Lion Breweries,[2] and was listed on both the Australian and New Zealand Stock Exchanges under the symbol LNN. On 17 September 2009, Lion Nathan shareholders overwhelmingly voted to accept a 100% takeover offer by Kirin.[3][4][5] The takeover was implemented on 21 October 2009, and the company was delisted.[6]

The northern division of New Zealand Breweries adopted the name Lion Breweries in 1977. Campbell and Ehrenfried bought 19.9 per cent of Lion Breweries in 1981. By the late 1980s, New Zealand Breweries had developed into one of New Zealand's largest companies. In 1988 Lion Breweries took over LD Nathan & Co, New Zealand's largest retailer, which at the time owned Woolworths NZ, to form Lion Nathan. The same year, Woolworths' general merchandise division was rebranded DEKA, with ownership transferred to the Farmers Trading Company in 1992. In 1990 it became an Australasian business when it established a major presence in Australia by securing management control of Bond Corporation’s brewing assets, including the Tooheys Brewery in Sydney and Castlemaine Perkins in Brisbane. In 1998 Douglas Myers sold most of his 16 percent share in Lion Nathan to Kirin Brewery Company of Japan.[2][8]

In 2005, Lion Nathan made a takeover bid for the independent South Australian Coopers Brewery. The takeover was strongly opposed by Coopers' management, and was rejected at an Extraordinary General Meeting when 93.4% of the shareholders voted in favour of permanently removing the "3rd tier purchasing rights" of Lion Nathan, effectively preventing any current or future takeover bid.

In June 2013, the company launched the Tap King draught beer product that is sold with a CO2 gas chamber so that consumers can drink draught beer at home. Lionel Richie appeared in a television commercial to promote the device and reportedly received A$$1.5 million to appear in the promotional campaign.[11] The introduction of the Tap King caused controversy, due to the perceived impact upon alcohol venues. Concerns were raised in regard to lower patronage rates for venues due to a greater incentive for consumers to drink beer in home environments.[12]

The company owns a number of breweries and contract bottling plants in Australia and New Zealand.[13]

Breweries in Australia include

Breweries in New Zealand include

Located in Brisbane. Castlemaine's signature beer, XXXX Bitter, was introduced in 1924. The XXXX had been used for a sparkling ale since 1878.

The South Australian Brewing Company was founded in 1859. There were two breweries, one in the West End of the Adelaide city centre (producing "West End" beers), and the other at Thebarton on the banks of the River Torrens north-west of the city centre (producing "Southwark" beers - pronounced Su-thik). The West End brewery was closed between the wars, and the operations consolidated with the Southwark brewery operations at the Thebarton site.

West End Draught remains the largest selling beer in South Australia. West End Draught is a currently a 4.5% abv pale lager, first brewed in 1859.[15] The brand is actively involved with the SANFL, was the original sponsor of the "Showdown" in the Australian Football League and is one of the sponsors of the "Slowdown" charity football match. The tradition of painting the Thebarton brewery chimney with the team colours of the SANFL premiership finalists began in 1954.[16]

Prior to the acquisition of the brewing assets by Lion Nathan in 1993, SA Brewing split its brewing assets into "SA Brewing Holdings", and its diversified operations were formed into a new listed company named Southcorp. One of Southcorp's major assets was "Southcorp Wines", (acquired from the Adelaide Steamship Company in 1990), and subsequently acquired by Lion main Australian rival, the Foster's Group.

James Squire is produced by the Malt Shovel Brewery in Sydney. The beer is named after the convict brewer James Squire, who is claimed to have created Australia's first commercial brewery.

Speciality Brews
Occasionally, the brewery creates seasonal speciality brews which are typically sold as limited-release products, produced in much smaller quantities than the regular brews. Past seasonal beers include :

Beers no longer in production

Despite their descriptions, all Speight's beers are lagers. 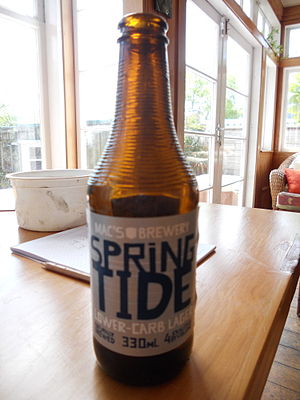 The company also has distribution arrangements with some wine brands through Fine Wine Partners in Australia and Distinguished Beverages in New Zealand.

Lion has the following brands under its Dairy & Drinks division:

Lion has the following brands under its Dairy & Drinks division: