From Infogalactic: the planetary knowledge core
(Redirected from Lionel of Antwerp)
Jump to: navigation, search

Lionel of Antwerp, 1st Duke of Clarence, jure uxoris 4th Earl of Ulster and 5th Baron of Connaught, KG (Norman: Leonell Duc de Clarence; 29 November 1338 – 7 October 1368) was the third son, but the second son to survive infancy, of Edward III of England and Philippa of Hainault. He was named for his birthplace, at Antwerp in Flanders.[1] Prince Lionel was born of a Flemish mother and was a grandson of William I, Count of Hainaut. He grew to be nearly seven feet in height and had an athletic build.[2]

Betrothed as a child to Elizabeth de Burgh, 4th Countess of Ulster (died 1363), daughter and heiress of William Donn de Burgh, 3rd Earl of Ulster, he was married to her in 1352, but before this date he had entered into possession of her great Irish inheritance.[3] He was called Earl of Ulster from 1347.[3]

Having been named as his father's representative in England in 1345 and again in 1346, Lionel joined an expedition into France in 1355, but his chief energies were reserved for the affairs of Ireland.[3]

Appointed governor of that country, he landed at Dublin in 1361, and in November of the following year was created Duke of Clarence, the third dukedom created in England, while his father made an abortive attempt to secure for him the crown of Scotland. His efforts to secure an effective authority over his Irish lands were only moderately successful. After holding a parliament at Kilkenny, which passed the celebrated Statute of Kilkenny in 1366, he dropped the task in disgust and returned to England.[3]

The poet Geoffrey Chaucer was at one time a page in Lionel's household.[3]

After Lionel's first wife Elizabeth died in 1363, a second marriage was arranged with Violante Visconti, daughter of Galeazzo Visconti, lord of Pavia. Journeying to fetch his bride, Lionel was received in great state both in France and Italy and was married to Violante at Milan in June 1368. Some months were then spent in festivities, during which Lionel was taken ill at Alba, where he died on 7 October 1368.[3] There was strong speculation at the time that he had been poisoned by his father-in-law,[4] although this has never been proven.

Lionel had only one child, Philippa, daughter of his first wife Elizabeth. In 1368 she married Edmund Mortimer, 3rd Earl of March. Their granddaughter and eventual heir, Anne Mortimer, married into the Yorkist branch of the English royal family and was the mother of Richard Plantagenet, 3rd Duke of York. The House of York based its claim to the English throne on this line of descent from Lionel, who was the eldest son of King Edward III to establish a lasting blood line (Edward's first-born son, the Black Prince, had no legitimate descendants past his two sons Edward of Angoulême and King Richard II).[3] Lionel was the ancestor of Kings Edward IV, Edward V, Richard III and all later British monarchs beginning with Henry VIII (in other words, all later British monarchs except for Henry VII, whose wife Elizabeth of York was his descendant). 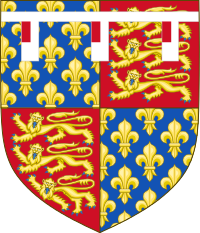 One reputed version of Lionel's coat of arms

Lionel's arms were at some point those of the kingdom, differenced by a label argent of five points, with each point bearing a cross gules, thus presenting the flag of England's Saint George's cross on each point[5] There are also suggestions, such as the above image, that at some point he bore a differentiating label argent of three points, each bearing a canton gules.