The lion is a common charge in heraldry. It traditionally symbolises bravery, nobility, royalty, strength, stateliness, and valour, because historically it has been regarded as the king of beasts.[1] 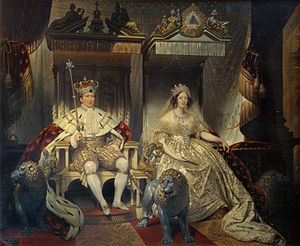 Three silver lions both guard and are a part of the Throne Chair of Denmark.
By Joseph-Désiré Court (1841) 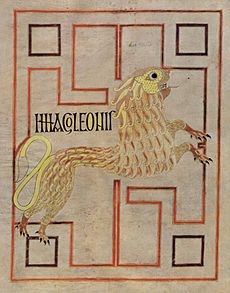 A Lion of Saint Mark, from the Echternach Gospels (late 7th century). 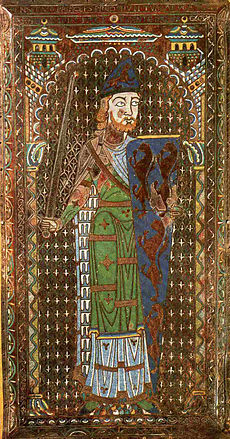 Enamel from the tomb of Geoffrey Plantagenet, Count of Anjou (c. 1160). 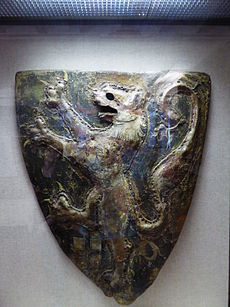 The shield of Conrad of Thuringia (c. 1230s), a rare example of a preserved 13th-century knightly shield, displaying the Ludovingian lion barry. 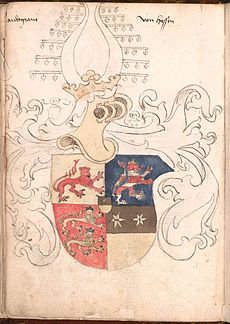 The coat of arms of the Landgrave of Hesse in the Wernigerode Armorial (late 15th century), shown as combining the lions of Hesse, Katzenelnbogen and Diez)

The animal designs in the heraldry of the high medieval period are a continuation of the animal style of the Viking Age, ultimately derived from the style of Scythian art as it developed from c. the 7th century BC.[2] Symmetrically paired animals in particular find continuation from Migration Period art via Insular art to Romanesque art and heraldry.

The animals of the "barbarian" (Eurasian) predecessors of heraldic designs are likely to have been used as clan symbols.[3] Adopted in Germanic tradition around the 5th century,[4] they were re-interpreted ina Christian context in the western kingdoms of Gaul and Italy in the 6th and 7th centuries. The characteristic of the lion as royal animal in particular is due the influence of the Physiologus, an early Christian book about animal symbolism, originally written in Greek in the 2nd century and translated into Latin in about AD 400. It was a predecessor of the medieval bestiaries.

The lion as a heraldic charge is present from the very earliest development of heraldry in the 12th century. One of the earliest known examples of armory as it subsequently came to be practiced can be seen on the tomb of Geoffrey Plantagenet, Count of Anjou, who died in 1151.[5] An enamel, probably commissioned by Geoffrey's widow between 1155 and 1160, depicts him carrying a blue shield decorated six golden lions rampant and wearing a blue helmet adorned with another lion. A chronicle dated to c. 1175 states that Geoffrey was given a shield of this description when he was knighted by his father-in-law, Henry I, in 1128.[6][7] Earlier heraldic writers attributed the lions of England to William the Conqueror, but the earliest evidence of the association of lions with the English crown is a seal bearing two lions passant, used by the future King John during the lifetime of his father, Henry II, who died in 1189.[8][9] Since Henry was the son of Geoffrey Plantagenet, it seems reasonable to suppose that the adoption of lions as an heraldic emblem by Henry or his sons might have been inspired by Geoffrey's shield. John's elder brother, Richard the Lionheart, who succeeded his father on the throne, is believed to have been the first to have borne the arms of three lions passant-guardant, still the arms of England, having earlier used two lions rampant combatant, which arms may also have belonged to his father.[10] Richard is also credited with having originated the English crest of a lion statant (now statant-guardant).[9][11]

Coats of arms of the 13th century include those of the House of Sverre (coat of arms of Norway), the Ludovingians (the lion of Hesse used by Conrad of Thuringia), Luxembourg, the kingdom of Ruthenia (Volhynia), the House of Habsburg (the Habsburgs all but abandoned their original coat of arms after gaining the Duchy of Austria in the 1270s, but it remained in use in derived lineages such as the House of Kyburg), the kingdom of Bulgaria and the Armenian Kingdom of Cilicia (Rubenids).

Unlike the eagle, which is comparatively rare in heraldry because it was reserved as an imperial symbol, the lion became a symbol of chivalry and was not restricted to royal coats of arms. The Zürich armorial (14th century) has a number of coats of arms with lions, most of them of ministeriales of the House of Habsburg.

The lion in the coat of arms of Bohemia is depicted with two tails (à la queue fourchée). According to Ménestrier, this is due to a jest made by Emperor Frederick, who granted Vladislaus II, Duke of Bohemia a coat of arms with a lion coué, that is, with its tail between its legs. Vladislaus' men refused to follow this emblem, calling it an ape, so that Frederick agreed to improve the arms by giving the lion not just one but two erect tails.[14]

As many attitudes (positions) now exist in heraldry as the heraldist's imagination can conjure, as a result of the ever-increasing need for differentiation, but very few of these were apparently known to medieval heralds.[15] One distinction commonly made (especially among French heralds), although it may be of limited importance, is the distinction of lions in the walking positions as leopards.[15] The following table summarizes the principal attitudes of heraldic lions:

Other terms are used to describe the lion's position in further detail. It should be noted that each coat of arms has a right and left (i.e. dexter and sinister) side - with respect to the person carrying the shield - so the left side of the shield as drawn on the page (thus the right side to the shield bearer) is called the dexter side. The lion's head is normally seen in agreement with the overall position, facing dexter (left) unless otherwise stated. If a lion's whole body is turned to face right, he is to sinister or contourné. If his whole body faces the viewer, he is affronté. If his head only faces the viewer he is guardant or gardant, and if he looks back over his shoulder he is regardant. These adjectives follow any other adjectives of position.

A lion (or other beast) coward carries the tail between its hind legs.[23] The tail also may be knotted (nowed), forked (queue fourchée) or doubled (double-queued); as in the arms of the kingdom of Bohemia.

Both lions and leopards may have been among the earliest beasts to appear in heraldry. The Oxford Guide to Heraldry notes that the earliest English treatise on heraldry, a late-13th or early-14th century Anglo-Norman manuscript titled De Heraudrie,[24] mentions the crow, eagle, griffin, heron, leopard, lion, martlet, popinjay, and swan.[25] Citing Bado Aureo, the Oxford Guide further suggests that the leopard, said to be "borne of an adulterous union between a lioness and a pard," and like a mule incapable of reproducing, may be an appropriate charge for a person born of adultery or barred from reproducing (such as an abbot).[26]

As a general rule, English heralds tend to identify lions as rampant (upright, in profile facing dexter), and leopards as passant guardant (walking, head turned to full face), but the heraldic distinction between lions and leopards is often ambiguous and in some cases may be controversial (as in the case of the royal arms of England, discussed below). Part of the confusion arises from international differences in translation or in the defining characteristics of each, particularly in charges that show some characteristics of each.

English herald Arthur Charles Fox-Davies asserted in 1909 that the leopard, denoting a lion passant guardant, was a term of French origin that had "long since become obsolete in English armory. In French blazon, however, the old distinction is still observed." Fox-Davies continued, "[French heralds] term our lion passant a léopard-lionné, and our lion rampant guardant is their lion-léopardé."[27] Dutch heraldist Johannes Rietstap, however, defined a Léopard lionné as a lion rampant guardant (i.e., upright like a lion with its head turned to full face like a leopard) and a Lion léopardé as a lion passant (i.e., walking like a leopard with its head facing dexter like a lion).[28] German-American heraldist Carl-Alexander von Volborth agrees with Rietstap's translations, in contrast to those of Fox-Davies as stated above.[29]

As if to clarify the situation, English heraldist Hugh Clark wrote in his Introduction to Heraldry (1829):

The true heraldic lion, according to French authors, is always to be represented in profile, or, as the ancient heralds say, showing but one eye and one ear. His attitude, also, should always be rampant or ravaging. When passant and full-faced, they blazoned him a leopard, vide Lion Leopardé: in England, however, the lions in the royal and other achievements have always been blazoned as lions, however depicted since the time of Henry III, in whose reign they were called "Leopards".
Lion Leopardé...is a French term for what the English call a Lion passant gardant. The word leopard is always made use of by the French heralds to express in their language, a lion full-faced, or gardant. Thus, when a lion is placed on an escutcheon in that attitude which we call rampant gardant, the French blazon it a Lion Leopardé. When he is passant only, they call him leopard lioné.[30]

English heraldist Charles Boutell wrote in 1890 that the lions of England were generally termed leopards until the end of the 14th century, including in the roll of arms of Henry III of England, and in a statute of Edward I of England, dating to 1300, which made reference to "signée de une teste de leopart—marked with the King's lion."[31] In English Heraldry (1867), Boutell explained:

Only when he was in this rampant attitude did the early Heralds consider any Lion to be a Lion, and blazon him by his true name. A lion walking and looking about him, the early Heralds held to be acting the part of a leopard: consequently, when he was in any such attitude, they blazoned him as "a leopard." The animal bearing that name bore it simply as an heraldic title, which distinguished a Lion in a particular attitude. These heraldic "leopards" were drawn in every respect as other heraldic "lions," without spots or any leopardish distinction whatever. This explains the usage, retained until late in the 14th century, which assigned to the Lions of the Royal Shield of England the name of "leopards." They were so called, not by the enemies of England for derision and insult, as some persons, in their ignorance of early Heraldry, have been pleased both to imagine and to assert; but the English Kings and Princes, who well knew their "Lions" to be Lions, in blazon styled them "leopards," because they also knew that Lions in the attitude of their "Lions" were heraldic "leopards."[32]

When the blazon does not specifically mention a position, the lion may be assumed to be rampant. If he is in a different position, other terminology must be used, referring to the position of his head and limbs. An early heraldic convention found in medieval blazons uses the distinction between a lion and a leopard previously employed by the ancient Greeks. In antiquity, the lion, having a heavy mane, was generally shown in profile, while the leopard, having less hair, was shown looking towards the observer. A lion looking towards the observer therefore came to be given the name of the animal usually shown in that pose.[33]

A wide variety of political entities across the world use lions in their official emblems. The following is just a sampling of these.

A small group of examples is depicted listed below.

Outside of classical heraldry, lions have also found their way onto the coats of arms or emblems used by modern states in Asia, often based on traditional depictions of lions in the respective cultures or regions.