Lipari (Sicilian: Lìpari, Latin: Lipara, Ancient Greek: Μελιγουνίς (Meligunís) or Λιπάρα (Lipára)) is the largest of the Aeolian Islands in the Tyrrhenian Sea off the northern coast of Sicily, and the name of the island's main town. Its population is 11,231, but during the May to September tourist season, the total population may reach up to 20,000.

Lipari is the largest of a chain of islands in a volcanic archipelago situated in between Vesuvius and Etna. The island has a surface area of 37.6 square kilometres (14.5 sq mi) and is 30 kilometres (19 mi) from Sicily. Besides the main town, most of the year-round population resides in one of the four main villages: Pianoconte is almost due west across the island, Quattropani in the northwest, Acquacalda along the northern coast, whereas Canneto is on the eastern shore north of Lipari town. 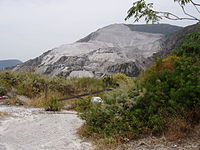 A pumice mine just east of Acquacalda. 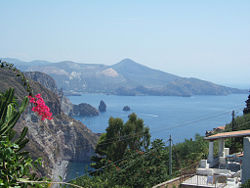 Geologists agree on the fact that Lipari was created by a succession of four volcanic movements, the most important of which was the third one, presumably lasting from 20,000 BC to 13,000 BC. A further important phenomenon should have happened around 9000 BC.[1] The last recorded eruptions occurred in the fifth century CE when airborne pumice, together with volcanic ash, covered the Roman villages of the island. The volcanoes are considered active, and steaming fumaroles and hydrothermal activity may still be seen. As a result of its volcanic origin, the island is covered with pumice and obsidian. Pumice mining has become a large industry on Lipari, and the pale pumice from Lipari is shipped worldwide.

In Neolithic times Lipari was, much like Sardinia, one of the few centers of trading in obsidian, a hard black volcanic glass prized by Neolithic peoples for the extremely sharp cutting edges that can be obtained. Lipari's history is rich in incidents as witnessed by the recent retrievals of several necropolis and other archaeological sites. Humans seem to have inhabited the island already in 5000 BC, though a local legend gives the eponymous name "Liparus" to the leader of a people coming from Campania.

In the Mycenaean Period, Lipari has yielded pottery from LHI to LHIII.[2][3]

Lipari's continuous occupation may have been interrupted violently when in the late 9th century Ausonian civilization site was burned and apparently not rebuilt. Many household objects have been retrieved from the charred site.

Greek colonists from Knidos arrived at Lipara ~580 BC after their first colonization attempt in Sicily failed and their leader, Pentathlos, was killed.[4] They settled on the site of the village now known as Castello. The colony successfully fought the Etruscans for control of the Tyrrhenian Sea. Carthaginian forces succeeded in holding the site briefly during their struggles with Dionysios I, tyrant of Syracuse in 394, but once they were gone the polis entered a three-way alliance which included Dionysios' new colony at Tyndaris. Lipara prospered, but in 304 Agathokles took the town by treachery and is said to have lost all of his pillage from it in a storm at sea. Many objects recovered from old wrecks are now in the Aeolian Museum of Lipari. Lipara became a Carthaginian naval base during the first Punic War, but fell to Roman forces in 252–251 BC, and was occupied by Agrippa in Octavian's campaign against Pompei. Under the Roman Empire, it was a place of retreat, exile and was enjoyed because of its baths (the hydrothermal waters are still used as a spa).

From the Middle Ages to present 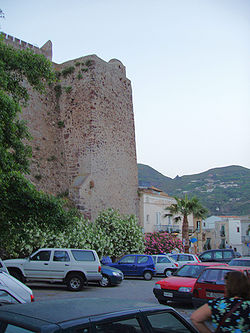 Lipari was probably an episcopal see from the 3rd century onward, with the first bishop being St. Agatone, who, according to tradition, had found the sacred remains of St. Bartholomew that had washed ashore, and put the precious relics for veneration in his cathedral. The presence of the relics has been attested since at least 546.

In the 9th century, Sicily was conquered by the Arabs, and soon Saracen pirates began to raid across the Tyrrhenian Sea, with dramatic effects for Lipari. In 839 the Saracens slaughtered much of the population, the relics of St. Bartholomew were moved to Benevento, and Lipari was eventually almost totally abandoned. The Normans conquered the Arabs throughout Sicily between 1060 and 1090, and repopulated the island once their rule was secure. The Lipari episcopal seat was reinstated in 1131.

Though still plagued by pirate raids, the island was continually populated from this time onward. Rule of the island was passed from the Normans to the Hohenstaufen Kings, followed by the Angevins, and then the Aragonese, until Carlos I, the Aragonese King became the Spanish King, and then quickly was crowned Holy Roman Emperor Charles V.

In 1544, Hayreddin Barbarossa, together with the French fleet of Captain Polin under a Franco-Ottoman alliance, ransacked Lipari and enslaved the entire population. Jérôme Maurand lamented about the depredation to his Christian fellow men during the campaign at Lipari: "To see so many poor Christians, and especially so many little boys and girls [enslaved] caused a very great pity." He also mentioned "the tears, wailings and cries of these poor Lipariotes, the father regarding his son and the mother her daughter... weeping while leaving their own city in order to be brought into slavery by those dogs who seemed like rapacious wolves amidst timid lambs".[5]

A number of the citizens were ransomed in Messina and eventually returned to the islands.

Charles V then had his Spanish subjects repopulate the island and build the massive city walls atop the walls of the ancient Greek acropolis in 1556.

The walls created a mighty fortress still standing today. The acropolis, high above the main town, was a safe haven for the populace in the event of a raid. While these walls protected the main town, it was not safe to live on the rest of the island until Mediterranean piracy was largely eradicated, which did not truly end until the 19th century.