The liquid droplet radiator (LDR) or previously termed liquid droplet stream radiator is a proposed lightweight radiator for the dissipation of waste heat generated by power plants, propulsion or spacecraft systems in space.

An advanced or future space mission must have a power source or propulsion that will require the rejection of waste heat. Disposing large quantities of waste heat must be considered in order to realize a large-space structure (LSS) that handle high power such as a nuclear reactor or a space solar power satellite (SPS).

Such space systems require advanced high-temperature thermal control systems. Liquid metal heat pipes with conventional radiators are considered ideally suited for such applications.[5] However, the required radiator surface area is huge, hence, the system mass is very large. The liquid droplet radiator (LDR) has an advantage in terms of the rejected heat power-weight ratio. The results of the studies indicate that for rejection temperatures below approximately 700 K, the LDR system is significantly lighter in weight than the other advanced radiator concepts. A LDR can be seven times lighter than conventional heat pipe radiators of similar size.[6] The LDR is more resistant to meteorite impacts due to less critical surface or windage, and requires less storage volume. Therefore, the LDR has attracted attention as an advanced radiator for high-power space systems.

In 1978, John M. Hedgepeth proposed, in "Ultralightweight Structures for Space Power," in Radiation Energy Conversion in Space, Vol. 61 of Progress in Astronautics and Aeronautics, K. W. Billman, ed. (AIAA, New York, 1978), p. 126, the use of a dust radiator to reduce the radiator weight of solar power satellites. Practical problems of this dust system led to the LDR concept in 1979. [1] Numerous studies have been made by companies, organizations and universities around the world.

Practical experiments were carried out for example with STS-77[5] and at drop shafts in Japan: Japan Microgravity Center (JAMIC) and Microgravity Laboratory of Japan.[7]

The liquid droplet radiator (LDR) system consists of a droplet generator, a collector, a heat exchanger, a recirculating pump, and a bellows-type pressure regulator (accumulator). While undergoing a reduction in pressure the saturated liquid is sprayed into space as coherent streams of tiny, discrete droplets. The droplet stream can be a column or a sheet of liquid droplets moving through space from the droplet generator to the collector. The droplets carry the waste heat generated by a space power system and radiate this waste heat directly to space during their flight by transient radiative heat transfer. The liquid droplets are collected at a lower temperature, reheated, and pumped to the droplet generator and reused to continue to remove waste heat from the thermodynamic power cycle.

The pressure at which liquid droplets are formed can vary widely in different applications, but it was found that once the droplet flow has been established, substantially lower pressures are needed to maintain the flow of droplet streams.[8]

Spacecraft waste heat is ultimately rejected to space by radiator surfaces. Radiators can be of different forms, such as spacecraft structural panels, flat-plate radiators mounted to the side of the spacecraft, panels deployed after the spacecraft is on orbit, and droplets. All radiators reject heat by infrared (IR) radiation from their surfaces. The radiating power depends on the surface's emittance and temperature. The radiator must reject both the spacecraft waste heat plus any radiant-heat loads from the environment or other spacecraft surfaces.[9] Most radiators are therefore given surface finishes with high IR emittance (ε > 0.8) to maximize heat rejection and low solar absorption (α < 0.2) to limit heat loads from the sun. High-temperature radiators are preferred for better efficiency and size reduction considerations, however, fluid property and droplet cloud property are additional factors. Droplet size formation and droplet density govern emission and reabsorption. A smaller droplet is essential for obtaining effective radiation in the liquid droplet radiator. A droplet with a diameter of 1 μm has been calculated to cool from 500 K to 252 K in two seconds. A dense cloud of the droplet sheet will retard the cooling rate of the droplets because of the reabsorption of the emitted light.[10]

A single droplet radiates heat as it travels through space and at any time this heat loss is given by:[6]

is the droplet heat loss rate to space (joules/second),

is the droplet radius (meters),

is the average gray body view factor for droplet at stream center (less than one), and

is the absolute droplet temperature at any time (kelvin).

This equation models the droplet as a gray body with constant average emissivity. The instantaneous radiation rate is equal to the rate of energy loss resulting in this equation:[6]

is the specific heat capacity,

is the density of droplet (kg/m3),

is the droplet transit time (seconds).

The operating environment is not simply black space, but one with solar radiation and diffuse radiation reflected and emitted from the sun (stars), earth, other objects, and or the ship's own antimatter propulsion. It is possible to "orient" the droplet sheet edge towards an external heat source but the sheet area would still be subject to radiation from other sources. Most of the presented solutions of the equation of radiative transfer are practical simplifications by introducing assumptions.

In order to achieve high collection efficiency splashing of the droplet on the collector surface has to be minimized. It was determined that droplet collector with an incidence angle of 35 degrees can prevent a uniform droplet stream with droplet diameter 250 µm and a velocity of 16 m/s from splashing under microgravity condition.[7] Another solution is to have a liquid film formed on the inner surface of the collector. When the droplet streams are absorbed in this liquid film, no splashes should be formed. A miscapture rate of incoming droplets was required to be less than 10−6. The droplet diameter was determined to be less than 300 µm and the droplet speed less than 20 m/s.[11] If a ferrofluid is used a magnetic focusing means can effectively suppress splashing.[8]

As the droplet sheet is in free fall a spacecraft performing a maneuver or angular acceleration would lose coolant. Even a magnetically focused LDR has a very limited tolerance of less than 10−3 g.

A droplet generator has approximately 105 – 106 holes (orifices) per system with diameters of 50–20 µm.[12] These orifices are more susceptible to damage than a conventional solide radiator or heat pipe which may affect droplet formation and droplet stream flow direction, potentially causing fluid loss.

Liquids with low vapor pressures are preferred for the working fluids to minimize evaporation loss due to flash evaporation.[13] Liquids have been found that in the range of 300 to 900 K have a vapor pressure so low that the evaporation loss during the normal lifetime of a space system (possibly as long as 30 years) will be only a small fraction of the total mass of the radiator. [14] Operating life of the fluid in the LDR environment is affected by thermal stability, oxidative stability, and resistance to radiation.[15]

If a liquid metal is used as the coolant, the pumping of the liquid may use an electromagnetic device. The device induces eddy currents in the metal that generate a Lorentz force with their associated magnetic fields. The effect is the pumping of the liquid metal resulting in a simplified design with no moving parts. This is known as MHD pumping.[16] For example, a simple mixture of mineral oil and iron filings was found to approximate a suitable ferrofluid for several seconds, before separation of the iron filings and oil was observed in the presence of a magnetic field. At droplet sizes of approximately 200 µm, surface tension will hold the two components at accelerations up to about 1 g.[8]

If an ionic fluid is used as the coolant, the fluid can be used for momentum transfer between spacecraft traveling at different speeds. It may be possible to synthesize the fluid in-situ. For example BMIM-BF4 ( [C8H15N2]+BF4−) is 42.5% carbon by mass. Lunar regolith typically contains several compounds with carbon and about 5% of asteroids are carbonaceous chondrites which are rich in carbon as well as metals and water. It may be possible to mine the moon for carbon and combine it with other elements to produce ionic fluid. Another good source of carbon is Mars' largest moon, Phobos, which is a captured asteroid believed to be rich in carbon.[17] 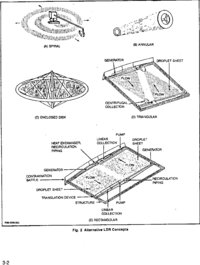 Several different LDR configurations have been proposed and evaluated.[1] [18]

Rectangular and triangular versions of the LDR have been investigated the most.

The LDR is being studied as a byproduct of a concept using a fluid stream for momentum transfer between an approaching spacecraft and another spacecraft, station or moon base. This method could reduce spacecraft mass while increasing space flight efficiency.[15]

A Liquid Sheet Radiator (LRS), adapted for planetary surfaces, is essentially a fountain enclosed in a transparent envelope. The liquid flows down on the inside of this envelope. The liquid sheet radiator concept is exceptionally stable and does not require special machining of the orifice to achieve its performance.[19]