Lisa Ruth Germano (born June 27, 1958) is an American singer/songwriter and multi-instrumentalist who has released seven albums featuring her often-hushed vocal style, confessional lyrics, and distinctive violin. Her 1994 album Geek the Girl received widespread critical acclaim, including being featured as a top album of the 1990s by the music magazine Spin. She is also known as a guest performer and/or session musician on over sixty records by a variety of artists, including John Mellencamp, Simple Minds, David Bowie, Yann Tiersen, Neil Finn, Sheryl Crow, Iggy Pop, Billy Joel, Jewel and Eels.

Germano was one of six children born into an Italian-American Catholic family in Mishawaka, Indiana. Her parents encouraged their children to learn instruments from an early age. Germano's first attempt at writing music was a 15-minute opera for the piano written at age 7. Later she took up the violin, the instrument that led her to a career in music.

She became a member of John Mellencamp's band during the recording of his 1987 album The Lonesome Jubilee, and continued to work and tour with him for the following seven years. During this time, she also toured and recorded with bands such as Simple Minds and the Indigo Girls, which prompted her to pursue her own music.

Germano issued her first solo album, the lo-fi On the Way Down From the Moon Palace, in 1991 on her own label, Major Bill Records. Without major distribution and promotion, sales were low, but the album helped bring Germano to the attention of Capitol Records, with whom she signed in 1992. Her major-label debut, Happiness, was released in July 1993, but just prior to its release, a personnel shake-up had occurred at Capitol, which resulted in the departure of most of her benefactors at the label. Once it became clear to her that the album was not going to receive the level of promotion that she had expected, Germano lobbied successfully to have the rights to the album returned to her, and later that year, she signed with the influential British independent label 4AD Records, who, at that time, had a manufacturing and distribution deal with Warner Bros. Records in the US.

4AD founder/president Ivo Watts-Russell was a big fan of Germano's work, and took an unusually active role in her first releases for the label, remixing some of the tracks from Happiness with John Fryer, who had produced and/or engineered several other of the label's acts and had been involved in Watts-Russell's This Mortal Coil project. In early 1994, 4AD issued a limited-edition EP, Inconsiderate Bitch, which contained five of the remixed tracks; and in April of that year, Happiness was reissued in a radically different form. The new version had very different artwork, and the songs, some of which were remixed, had been completely resequenced (two tracks, including her cover of "These Boots Are Made for Walkin'", were omitted, and replaced by two others that had been recorded around the same time, including "Destroy the Flower"). Her third album, Geek the Girl, was also released later in 1994. The album earned Germano the most praise she'd yet received from the press, becoming a critical favorite and a noted album from the 1990s. Much attention was given to the track "...A Psychopath," which contains audio taken from an actual 9-1-1 emergency phone call placed by a woman who was being terrorized by an intruder in her home. In 1995, Germano contributed the song "The Mirror Is Gone" to the AIDS benefit album Red Hot + Bothered produced by the Red Hot Organization.

Her next album, Excerpts From a Love Circus, arrived in 1996, and received a fair amount of acclaim in music-related magazines including Spin and Rolling Stone. Earlier that same year, Watts-Russell approached all of 4AD's artists with the idea that each act would find another artist or band to collaborate with on three songs, and the resulting recordings would be released by the label as a monthly series of EPs. Germano chose to work with the Tucson-based rock band Giant Sand, but after their tracks had been recorded, 4AD decided that the series would be unfeasible, and scrapped the idea. Germano and the members of Giant Sand liked the results and enjoyed collaborating, and despite the labels' lack of interest in the recordings, recorded a studio album of new material together in less than a week. The managers for Germano and Giant Sand worked together and struck a deal with Thirsty Ear Recordings to release the album as a one-off project under the name OP8, and the album, Slush, was released in February 1997. In April 1997, 4AD began servicing "I Love a Snot" (remixed by Tchad Blake) to radio and retail in America, but sales of the album remained static at best. Another Germano collaboration of sorts was released later that year, when another Excerpts From a Love Circus track, "Lovesick", was remixed by drum & bass producer The Underdog (aka Trevor Jackson, later of Playgroup), and released as a single on his Output Recordings label.

Sales began to sag noticeably with the release of Slide (produced by Tchad Blake) in July 1998. 4AD's distribution deal with Warner Bros. had come to an end, returning the label to its independent status; for Germano, that meant that Slide received less promotion, since her label no longer had Warner Bros.' resources to draw upon. That summer, just before the album's release, she was invited to join The Smashing Pumpkins (whose fourth album, Adore, was released just weeks before Slide) on tour as backing vocalist. Initially, she turned them down, but Pumpkins frontman Billy Corgan convinced her that her role would be somewhat collaborative in nature, and she agreed to the tour. She joined the band in Chicago for four weeks of rehearsals in preparation for a four-month tour, but then, the night before the tour was to begin, she was dismissed by Corgan (via their tour manager) with no explanation, and the Pumpkins embarked on the tour without her. That fall, intent on resuming the promotion of Slide, she went out on tour, first opening up for Eels, and then later headlining smaller clubs; but while on tour, she was notified by 4AD that they were dropping her from the roster. By the end of 1998, she announced that she was done with the music business, and dispensed with her management. 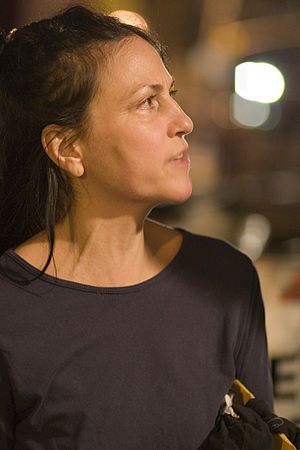 Germano moved to Hollywood, and began working at an independent bookstore. Songwriting, however, remained an integral part of her life, and she kept connected musically by collaborating with other artists, such as Yann Tiersen, David Bowie, Neil Finn, and Joey Waronker, on various projects. She returned to her solo career in 2002 with a flurry of releases. Independently, she released two compilations of songs from her back catalog: Concentrated is a selection of "greatest hits" with a few oddities (such as the Underdog remix of "Lovesick"); Rare, Unusual or Just Bad Songs, however, is composed entirely of rarities (like "Breathe Acrost Texas", which was omitted from the reissue of Happiness) and tracks that had never been available before, and each copy came with an insert painted by Germano herself. Later that year, she began gathering songs she had been writing and recording (mostly by herself at home) over the previous two years, and sent CDs of these tracks to a few labels and various friends in the music industry; the first to respond was her longtime acquaintance, producer/label executive Tony Berg. After the relative success of the ARTISTdirect family of music-related websites, co-founder and then-CEO Marc Geiger decided to start an actual record label, leading to the creation of the Ineffable imprint with Berg in 2002, with Germano as the label's first signing. Her sixth album, Lullaby for Liquid Pig, released in April 2003, features performances by guitarist Johnny Marr (formerly of The Smiths, currently of Modest Mouse), Neil Finn, and Wendy Melvoin. As before, the album met with critical acclaim, but the label itself was not successful enough for its owners, who shut it down shortly thereafter.

In 2006, Germano was invited by former Swans leader Michael Gira to join the roster of his label, Young God Records. Young God released her sixth solo album, In the Maybe World, in July of that year, and then reissued Lullaby for Liquid Pig in June 2007 with a bonus disc of unreleased live recordings and demos.

Germano released many singles in the 1990s. Music videos were made for most.