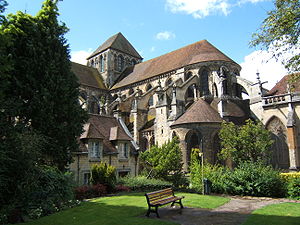 Apse of Lisieux Cathedral, from the close 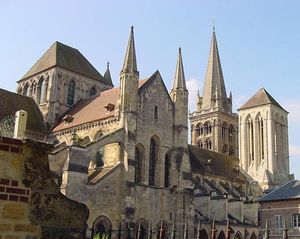 The cathedral from the northwest
File:Normandie Calvados Lisieux3 tango7174.jpg
Interior

Lisieux Cathedral (Cathédrale Saint-Pierre de Lisieux) is a Roman Catholic cathedral, and a national monument of France, in Lisieux. Built between 1170 and the middle of the 13th century through the initiative of Bishop Arnulf, the cathedral was the seat of the Bishop of Lisieux until the diocese of Lisieux was abolished under the Concordat of 1801 and merged into the Diocese of Bayeux.

The west front of the building consists of three portals surmounted by two towers. The south tower was built in the 16th century and at the top bears a 17th-century flèche. Buttresses were added to the south face in the 15th century. The cathedral survived World War II wholly intact.

An earlier cathedral is presumed to have existed since the 6th century, as there was a Bishop of Lisieux from that time, but nothing is known of the earlier edifice.

It is the burial place of Pierre Cauchon, who prosecuted Joan of Arc.