List of 1970s one-hit wonders in the United States

This is a list of musical artists whose one hit came out in the 1970s. 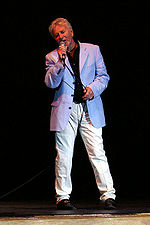 Tony Burrows in 2008. He was a member of several one-hit wonder bands, including Edison Lighthouse, White Plains, The Pipkins, The Brotherhood of Man and The First Class.

The list contains recording artists who reached the Top 40 of the U.S. pop chart (the Billboard Hot 100) with just one single.

Artists in italics have only one Top 40 hit, but either

Several artists in the list (marked in italics on the main tables) are worth noting for achieving success or popularity outside of the Billboard Hot 100:

Several other artists are worth noting for achieving success or popularity in other fields outside of the music industry:

Several songs on the list also feature credited appearances by artists with two or more Top 40 hits, either as featured artists or collaborating artists (I).