The Australian Open[a][b] is an annual tennis tournament created in 1905 and played on outdoor hardcourts[c][d] at Melbourne Park in Melbourne, Australia.[1] The Australian Open is played over a two-week period beginning in mid-January and has been chronologically the first of the four Grand Slam tournaments each year since 1987. The event was not held from 1916 to 1918 because of World War I, from 1940 to 1945 because of World War II and in 1986.[2][3] The timing of the Australian Open has changed several times. In 1977, the date of the final moved from January to December, which resulted in having two Australian Opens in 1977; there was a January edition and a December edition that year.[4] The originally planned December 1986 edition was moved forward to January 1987, resulting in no Australian Open in 1986.[5][6]

Christchurch and Hastings, New Zealand, and Perth, Brisbane, Adelaide, Sydney and Melbourne, Australia, have hosted the men's singles event. The event switched cities every year before it settled in 1972 in Melbourne. The event was held at the Kooyong Stadium before moving to Melbourne Park in 1988.[2]

The men's singles rules have undergone several changes since the first edition. This event has always been contested in a knockout format, and all matches have been best-of-five sets except in 1970, 1973, and 1974, when the first round was best-of-three sets, and in 1982, when the third and fourth round were best-of-three sets.[1] Since 1905, all sets have been decided in the advantage format. The lingering death best-of-twelve points tie-break was introduced in 1971 and has been used for the first four sets since then, except from 1980 to 1982, when the tie-break was also played in fifth sets.[1][10]

The champion receives a miniature replica of the silver-gilt Norman Brookes Challenge Cup, named after the 1911 champion and former Lawn Tennis Association of Australia (LTAA) president, and modeled after the Warwick Vase.[11] In 2010, the winner received prize money of A$2,100,000.[12] 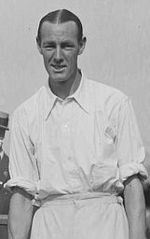 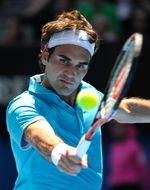 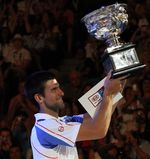