From Infogalactic: the planetary knowledge core
(Redirected from List of Chinese monarchs)
Jump to: navigation, search 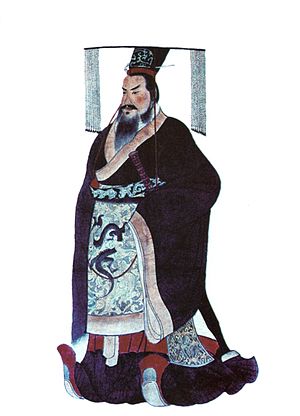 The list of rulers of China includes rulers of China with various titles. From the Zhou dynasty to the Qin dynasty, rulers usually held the title "king" (Chinese: 王; pinyin: wáng). With the separation of China into different Warring States, this title had become so common that the unifier of China, the first Qin Emperor Qin Shihuang created a new title for himself, that of "emperor" (pinyin: huángdì). The title of emperor of China continued to be used for the remainder of China's imperial history, right down to the fall of the Qing dynasty in 1912. While many other monarchs existed in and around China throughout its history, this list covers only those with a quasi-legitimate claim to the majority of China, or those who have traditionally been named in king-lists. The following list of Chinese monarchs is in no way comprehensive. Chinese sovereigns were known by many different names, and how they should be identified is often confusing. Sometimes the same emperor is commonly known by two or three separate names, or the same name is used by emperors of different dynasties. The tables below do not necessarily include all of an emperor's names – for example, posthumous names could run to more than twenty characters and were rarely used in historical writing – but, where possible, the most commonly used name or naming convention has been indicated.

These tables may not necessarily represent the most recently updated information on Chinese monarchs; please check the page for the relevant dynasty for possible additional information.

Follow these links to see how they are related:

Although it is ingrained in Chinese mythology that the earliest mythological rulers of China included three huáng (皇, generally translated "sovereign" or "august one", denoting demigod status) and five dì (帝, generally translated "emperor", but denoting much more reverential status than the modern term "emperor"). Their identities have differed between different sources, with some individuals such as the Yellow Emperor being regarded as either sovereign or emperor, depending on the source. The two characters would later be taken together by Qin Shihuang to form the new title huángdì (皇帝, emperor), thus claiming legendary status for himself. These figures are all legendary, not historical.

Main article: List of emperors of the Han dynasty

Main article: List of emperors of the Liao dynasty

Main article: List of emperors of the Song dynasty

Main article: List of emperors of the Yuan dynasty

Main article: List of emperors of the Ming dynasty

The Southern Ming dynasty refers to the Ming loyalist regimes that existed in Southern China from 1644 to 1662. The regime was established by the princes of the already destroyed Ming dynasty. All of these monarchs had their regimes crushed by the Qing forces very quickly. Koxinga (Zheng Chenggong) used the Ming dynasty's name and gathered forces before fleeing to Taiwan.

Main article: List of emperors of the Qing dynasty

A short-lived attempt by statesman and general Yuan Shikai who attempted to establish himself as emperor in 1915, but his rule is universally accepted as inauthentic. After 83 days, the reign collapsed.