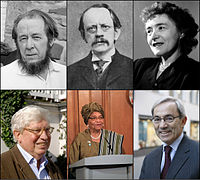 The Nobel Prize is an annual, international prize first awarded in 1901 for achievements in Physics, Chemistry, Physiology or Medicine, Literature, and Peace. An associated prize in Economics has been awarded since 1969.[3] Nobel Prizes have been awarded to 881 individuals.[4] According to 100 Years of Nobel Prize (2005), a review of Nobel prizes awarded between 1901 and 2000, 65.4% of Nobel Prize Laureates, have identified Christianity in its various forms as their religious preference (427 prizes).[5] Overall, Christians have won a total of 78.3% of all the Nobel Prizes in Peace, 72.5% in Chemistry, 65.3% in Physics, 62% in Medicine, 54% in Economics and 49.5% of all Literature awards.[6]

According to Scientific Elite: Nobel Laureates in the United States by Harriet Zuckerman, a review of American Nobel prizes awarded between 1901 and 1972, 72% of American Nobel Prize laureates identified a Protestant background.[12] Overall, 84.2% of all the Nobel Prizes awarded to Americans in Chemistry, 60% in Medicine, and 58.6% in Physics between 1901 and 1972 were won by Protestants.[12]

The following table shows the religion of Nobel laureates between the years 1901 and 2000.[6]

This list is non-exhaustive and includes Nobel laureates with a Christian background and those who identified with the Christian faith. It is worth noting that some of the Nobel laureates in the list are devout Christians, with Christianity having an influence on their thinking and writing, while others are nominally Christian, but identify themselves as Christians and/or members of a Christian denomination.