This is a list of internal combustion engines manufactured by Ferrari.

Ferrari was rare among automobile manufacturers in attempting to build a straight-2 automobile engine. The racing prototype never made it to production.

During the 90s Ferrari developed an experimental straight-3 two-stroke engine.

Lampredi designed a straight-4 engine for Formula Two use. Different versions of this engine were later used in Formula One and sports car racing.

Lampredi also modified his four into a straight-6 for racing use.

Ferrari's Dino project of the 1956 gave birth to the company's well-known 65° V6 engines. This Vittorio Jano design formed the basis of the company's modern engines right up through the mid-2000s (decade). Another series of V6 engines was started in 1958 with a 60° V-angle and single overhead camshafts design.

The first V8 engine was derived from a Lancia project, used in D50 F1 racecar. The Dino V8 family lasted from the early 1970s through 2004 when it was replaced by a new Ferrari/Maserati design. 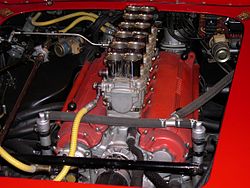 Ferrari is best known for its V12 and flat-12 (horizontally opposed cylinder) engines.