Formula One, abbreviated to F1, is the highest class of open-wheeled auto racing defined by the Fédération Internationale de l'Automobile (FIA), motorsport's world governing body.[1] The "formula" in the name refers to a set of rules to which all participants and cars must conform. The F1 world championship season consists of a series of races, known as Grands Prix, held usually on purpose-built circuits, and in a few cases on closed city streets. The most famous Grand Prix is the Monaco Grand Prix in Monte Carlo.[2] Each winner is presented with a trophy and the results of each race are combined to determine two annual Championships, one for drivers and one for constructors.

Michael Schumacher holds the record for the most Grand Prix victories, having won 91 times.[3] Alain Prost is second with 51 wins and Lewis Hamilton is third with 43 wins. Michael Schumacher holds the distinction of having the longest time between his first win and his last. He won his first Grand Prix in 1992 at the Belgian Grand Prix, and his last in 2006 at the Chinese Grand Prix, a span of 14 years, 1 month and 1 day.[4] Sebastian Vettel holds the record for the most consecutive wins, having won nine Grands Prix in a row from the 2013 Belgian Grand Prix to the 2013 Brazilian Grand Prix. He is also the youngest winner of a Grand Prix; he was 21 years, 73 days old when he won the 2008 Italian Grand Prix.[5] Luigi Fagioli is the oldest winner of a Formula One Grand Prix; he was 53 years and 22 days old when he won the 1951 French Grand Prix.[6] 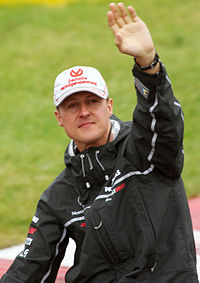 Michael Schumacher, who won a record 91 Grands Prix during his career.

All figures correct as of the end of the 2015 season

All figures correct as of the end of the 2015 season