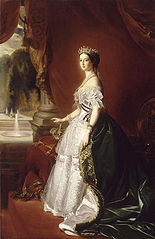 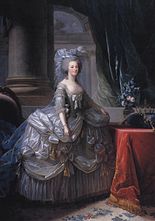 Marie Antoinette, Queen of Louis XVI was beheaded during the French Revolution

This is a list of the women who have been queens consort or empresses consort of the French monarchy. All monarchs of France were male, although some women have governed France as regents.

53 women were married to French monarchs: 49 queens and three empresses. Ingeborg of Denmark and Anne of Brittany were each queen more than once. Marie Josephine Louise of Savoy was queen de jure during the Republican and Imperial periods, but never wife of the de facto head of the French state.

From 1285–1328, the crowns of Navarre and France were united by virtue of the marriage of Joan I of Navarre to Philip IV of France, and by the succession of their three sons, Louis X, Philip V, and Charles IV. Thus, the wives of these three kings were queens consort not only of France but of Navarre. With the death of Charles IV, however, Navarre passed out of the hands of the French kings until 1589, when Henry III of Navarre became Henry IV of France.

Many French consorts acted as regents for their husbands or children, during their minorities. These were: 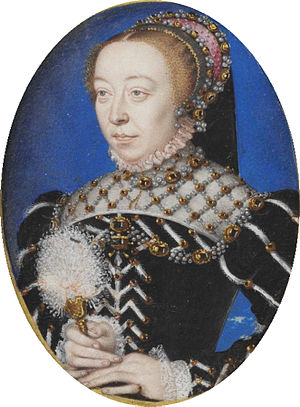 Catherine de Medici served as regent for her husband and sons

Madame de Maintenon, mistress of Louis XIV, married the king in the winter of 1685–1686 privately by François de Harlay de Champvallon, archbishop of Paris, in the presence, it is believed, of Père la Chaise, the king's confessor, the Marquis de Montchevreuil, the chevalier de Forbin, and Alexandre Bontemps. Owing to the inequality of social status, she and the King did not marry openly (which would have allowed her to become queen). No written proof of the marriage is extant, but that it took place is nevertheless certain.[citation needed] It is important to remember that Madame de Maintenon was never queen of France, simply a royal consort.

Some sources refer to Margaret of Anjou as Queen of France,[1] but her right to enjoy that title is disputed. She was briefly recognized only in English-controlled territories of France. (See main article:Dual monarchy of England and France)