The following is a list of the governors and governors general of Canada. Though the present-day office of the Governor General of Canada is legislatively covered under the Constitution Act, 1867 and legally constituted by the Letters Patent, 1947, the institution is, along with the institution of the Crown it represents, the oldest continuous and uniquely Canadian institution in Canada, having existed in an unbroken line since the appointment of Samuel de Champlain in 1627.[1]

Governors-in-Chief/Governors General of the Canadas, 1786–1841

Main article: Administrator of the Government of Canada 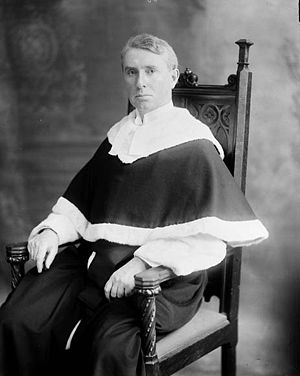 Chief Justice Lyman Duff was administrator of Canada in 1940.

The following is a list of Administrators of the Government, Justices of the Supreme Court of Canada who were acting governors appointed as the result of the death, resignation or prolonged absence of the sitting viceroy, or for any other reason: