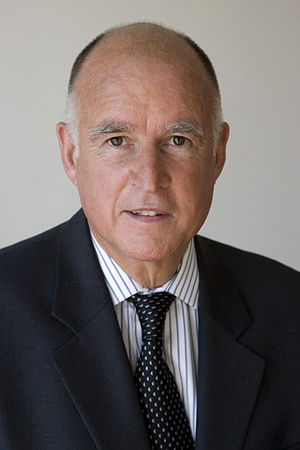 Jerry Brown, 34th and the current 39th Governor of California. He is the longest serving governor in California history.

The Governor of California is the chief executive of the California state government, whose responsibilities include making annual State of the State addresses to the California State Legislature, submitting the budget, and ensuring that state laws are enforced. The governor is also the commander-in-chief of the state's military forces.

There have been 38 governors; many have been influential nationwide in areas far-flung from politics. Leland Stanford founded Stanford University in 1891. Earl Warren, later Chief Justice of the United States, won an election with the nominations of the three major parties – the only person ever to run essentially unopposed for governor of California. Ronald Reagan, who was president of the Screen Actors Guild and later President of the United States, and Arnold Schwarzenegger both came to prominence through acting. Gray Davis, the 37th governor of California, was the second governor in American history to be recalled by voters. The shortest tenure was that of Milton Latham, who served only five days before being elected by the legislature to fill a vacant United States Senate seat. The longest tenure is that of the current governor, Edmund Gerald "Jerry" Brown, Jr., who previously served as governor from 1975 to 1983 and has been serving again since 2011. He is the son of former governor Edmund Gerald "Pat" Brown, Sr. who served from 1959-1967.

For the governors prior to statehood, see the List of Governors of California before admission.

California was obtained by the United States in the Mexican Cession following the Mexican–American War. Unlike most other states, it was never organized as a territory, and was admitted as the 31st state on September 9, 1850.

The original California Constitution of 1849 called for elections every two years, with no set start date for the term. An amendment ratified in 1862 increased the term to four years,[1] and the 1879 constitution set the term to begin on the first Monday in January following an election. In 1990, Proposition 140 led to a constitutional amendment[2] implementing a term limit of two terms;[3] prior to this limit, only one governor, Earl Warren, served more than two terms. Jerry Brown was able to be elected to a third term in 2010 because his previous terms were before the term limit was enacted. The 1849 constitution also created the office of lieutenant governor, who, in cases of vacancy in the office of governor, becomes governor.[4] The governor and lieutenant governor are not elected on the same ticket.

There are four former governors of California who are currently alive, the oldest being George Deukmejian, born 1928. The most recent death of a former governor was that of Ronald Reagan (served 1967-1975, born 1911) on June 5, 2004. Jerry Brown, who served as governor from 1975 to 1983, is currently serving and thus is not included on this list.