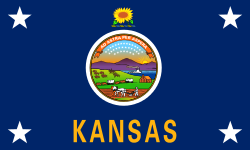 Standard of the Governor of Kansas

The Governor of Kansas is the head of the executive branch of Kansas's state government[1] and the commander-in-chief of the state's military forces.[2] The governor has a duty to enforce state laws,[1] and the power to either approve or veto bills passed by the Kansas Legislature,[3] to convene the legislature at any time,[4] and to grant pardons.[5]

Since becoming a state, Kansas has had 45 governors, including 32 Republicans, 11 Democrats, and 2 Populists. The state's longest-serving governors were Robert Docking, John W. Carlin, and Bill Graves, each of whom served 8 years and 4 days (Docking served four two-year terms; Carlin and Graves each served two four-year terms). The shortest-serving governor was John McCuish, who served only 11 days after the resignation of Fred Hall. The current governor is Republican Sam Brownback, who took office January 10, 2011 and was reelected November 4, 2014.

This is a table of congressional seats, other federal offices, and other governorships held by governors. All representatives and senators mentioned represented Kansas except where noted. * denotes those offices which the governor resigned to take.