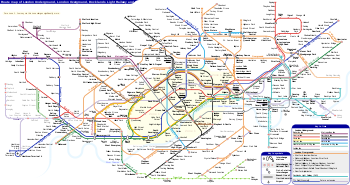 A topological tube map of the London Underground system. Also included are the London Overground, Docklands Light Railway, the Tramlink, and Crossrail systems for integration purposes.

The London Underground is a metro system in the United Kingdom that serves Greater London and the home counties of Buckinghamshire, Essex and Hertfordshire. Its first section opened in 1863,[1] making it the oldest underground metro system in the world – although in fact approximately 55 per cent of the current network is above ground,[2] as it generally runs on the surface in outlying suburbs. The system comprises 11 lines – Bakerloo, Central, Circle, District, Hammersmith & City, Jubilee, Metropolitan, Northern, Piccadilly, Victoria, Waterloo & City – serving 270 stations.[3] It is operated by Transport for London (TfL).

Most of the system is north of the River Thames, with six London boroughs in the south of the city not served by the Underground. The London Borough of Hackney, to the north, has two stations on its border. Some stations at the north-eastern end of the Central line are in the Epping Forest district of Essex and some stations at the north-western end of the Metropolitan line are in the Three Rivers and Watford districts of Hertfordshire and the Chiltern district of Buckinghamshire.

Listed for each station are the line(s) serving it, local authority and the fare zone in which it is located,[note 1] the date it and any earlier main line service opened, previous names and passenger usage statistics in millions per year.

Transport for London is currently planning extensions to the Metropolitan and Northern lines that will add six new stations to the network: four in Watford and two in Wandsworth. One current station, Watford on the Metropolitan line, will close as the branch that it is on will be diverted on to a new route.

* ^ Where more than one line serves a station, lines are listed in the order of opening. In some cases stations were first served by one underground line but later transferred to another:

† ^ Some stations are assigned to multiple zones. People travelling through these stations may treat the station as in whatever zone makes their fare the least expensive.