From Infogalactic: the planetary knowledge core
Jump to: navigation, search
300px
Plaques of numbers retired by the New York Yankees in Monument Park at Yankee Stadium 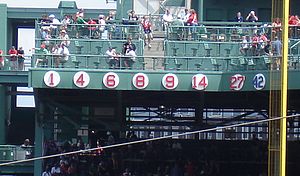 Major League Baseball and its participating clubs have retired various uniform numbers over the course of time, ensuring that those numbers are never worn again and thus will always be associated with particular players or managers of note. The use of numbers on uniforms to better identify one player from another, and hence to boost sales of scorecards, was tried briefly by the Cleveland Indians of 1916. The first team to permanently adopt the practice was the New York Yankees of 1929. By 1932, all sixteen major league clubs were issuing numbers, and by 1937, the leagues passed rules requiring it.

The Yankees' original approach was to simply assign the numbers 1 through 8 to the regular starting lineup in their normal batting order. Hence, Babe Ruth wore number 3 and Lou Gehrig number 4. The first major leaguer whose number was retired was Gehrig, in July 1939, following his retirement due to amyotrophic lateral sclerosis, which became known popularly as Lou Gehrig's Disease.

Since then, over 150 other people have had their numbers retired, some with more than one team. This includes managers and coaches, as Major League Baseball is the only one of the major North American professional leagues in which the coaching staff wear the same uniforms as players. Three numbers have been retired in honor of people not directly involved on the playing field - all three for team executives. Some of the game's early stars, such as Ty Cobb and Christy Mathewson, retired before numbers came into usage. Teams often celebrate their retired numbers and other honored people by hanging banners with the numbers and names. Early stars, as well as honored non-players, will often have numberless banners hanging along with the retired numbers. Because fewer and fewer players stay with one team long enough to warrant their number being retired, some players believe that getting their number retired is a greater honor than going into the Baseball Hall of Fame. Ron Santo, upon his number 10 being retired by the Chicago Cubs on the last day of the 2003 regular season, enthusiastically told the Wrigley Field crowd as his #10 flag was hoisted, "This is my Hall of Fame!"[1] However, Santo would be inducted into the Hall of Fame in July 2012, nearly two years after his death, after being voted in by the Veterans Committee.

It is very rare for a team to reissue a retired number, and usually requires a special circumstance, such as the player for whom the number was retired coming out of retirement himself. Harold Baines is an example of this.

In cases of franchise relocation, the handling of existing retired numbers is at the discretion of team management. They may decide to continue honoring the retired numbers, including the San Francisco Giants, or they may choose to make a "fresh start" and reissue the numbers, as the Washington Nationals have done.

The Cincinnati Reds have placed Willard Hershberger's number 5 into circulation two years after his death. Cincinnati later re-retired the number 5 for Johnny Bench. When the Florida Marlins moved to their current stadium, Marlins Park, and rebranded as the Miami Marlins; the number 5, which was retired for their late first president, Carl Barger, was placed into circulation because Logan Morrison requested to wear the number to honor his father.[2]

Retired in honor of multiple players

The following numbers have been retired in honor of multiple players:

Three teams do not currently have any retired jersey numbers (other than Robinson's #42 retired in all of MLB). The Seattle Mariners have yet to retire any jersey numbers, but the #24 of Ken Griffey Jr. will be retired during the 2016 season, with the formal retirement ceremony to be held on August 6. Uniquely, this retirement will be effective not only for the Mariners themselves, but also for all Mariners minor-league teams.[7] The Miami Marlins had previously retired #5 in honor of their first team president, the late Carl Barger, but un-retired it entering the 2012 season. The Washington Nationals franchise had retired jerseys in honor of four players when known as the Montreal Expos, but un-retired them upon moving to Washington.

The Mariners have kept the following numbers out of circulation since the departure of a popular member of the team who wore it: #11 (Edgar Martínez), #14 (Lou Piniella), #19 (Jay Buhner), and #51 (initially for Randy Johnson, and later for Ichiro Suzuki). Similarly, no one had worn #33 for the Colorado Rockies since the departure of Larry Walker in 2004 until Walker gave his blessing for Justin Morneau, a fellow British Columbia native who had idolized Walker as a boy, to wear it when Morneau joined the team in 2014.[8]

Some teams have not formally retired certain numbers, but nonetheless kept them out of circulation. For example, the Cincinnati Reds have only assigned Pete Rose's #14 to one other player after his retirement: his own son. #14 cannot be retired in honor of the older Rose due to his lifetime ban from baseball. The Los Angeles Dodgers' current policy is only to retire the numbers of longtime club members if they are inducted into the Hall of Fame; the lone exception was longtime Dodger player and coach Jim Gilliam, whose #19 was retired when he died of a cerebral hemorrhage during the Dodgers' 1978 postseason run. Nevertheless, the Dodgers have informally kept Fernando Valenzuela's #34 out of circulation since his retirement.[9]

The New York Mets have not assigned Mike Piazza's #31 since he left the team in 2005. On opening day of the 2012 season the Mets unveiled a memorial "Kid 8" logo to honor the late Gary Carter. Although no Met has worn the number 8 since Carter's election to the Hall of Fame, it is not retired. Following Willie Mays' retirement in 1973, Mets owner Joan Payson promised him that the team would not reissue his #24; since then, the only Met to wear it has been Rickey Henderson from 1999 to 2000 (with the exception of a minor league call-up named Kelvin Torve, who was inexplicably issued #24 in August 1990 before fan complaints prompted the team to change his number to #39 ten days later[10]).

After Darryl Kile's death in 2002, the teams he played for (Colorado Rockies, Houston Astros, and St. Louis Cardinals) took his #57 out of circulation, but have not formally retired the number.

The New York Yankees have not re-issued Paul O'Neill's #21 since he ended his career, except for a brief period in 2008 when Morgan Ensberg and then LaTroy Hawkins wore #21, before fan complaints led Hawkins to change his number to #22 in April.

The Boston Red Sox have not re-issued uniform numbers 21 (Roger Clemens), 33 (Jason Varitek) and 49 (Tim Wakefield) since those players left the Red Sox or ended their careers.

Normally the individual clubs are responsible for retiring numbers. On April 15, 1997, Major League Baseball took the unusual move of retiring a number for all teams. On the 50th anniversary of Jackie Robinson's breaking the major league color barrier, his number 42 was retired throughout the majors, at the order of Commissioner Bud Selig. This meant that no future player on any major league team could wear number 42, although players wearing #42 at the time were allowed to continue wearing it (Mariano Rivera was the last active player to be grandfathered in, retiring after the 2013 season). Starting in the 2007 season, the 60th anniversary of Robinson's Major League debut, players and coaches have all worn the number 42 as a tribute to Robinson on Jackie Robinson Day, April 15.

There is a lobby to have uniform #21 retired in all of baseball to honor Roberto Clemente.[11]

Four teams have honored players who played before the advent of uniform numbers by placing their names among those of players whose numbers have been retired:

See: Umpire (baseball)#Numbers retired by the National and American Leagues