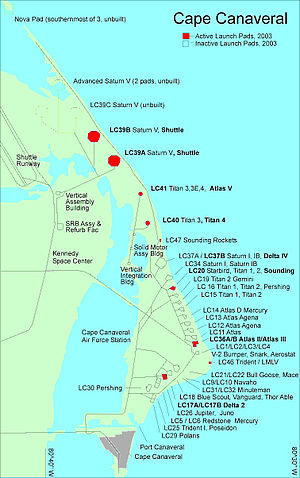 Map of launch complexes on Merritt Island and Cape Canaveral
File:CCAFS-Launch-Pads.jpg
Looking east at LC-36, 40 and 41 on CCAFS in 2005

The civilian John F. Kennedy Space Center, operated by NASA, has one launch complex with two pads on Merritt Island. From 1968–1975, it was the site of 13 Saturn V launches, three manned Skylab flights and the Apollo-Soyuz Test Project; all Space Shuttle flights from 1981–2011, and 1 Ares 1-X flight in 2009.

The military Cape Canaveral Air Force Station (CCAFS), operated by the 45th Space Wing of the U.S. Air Force, was the site of all pre-Apollo 8 manned launches, as well as many other early Department of Defense (DoD) and NASA launches. For the DoD, it plays a secondary role to Vandenberg AFB in California, but is the launch site for many NASA unmanned space probes, as those spacecraft are typically launched on Air Force launchers. Active launch vehicles are in bold.

Much of the support activity for CCAFS occurs at Patrick Air Force Base to the south, its reporting base.

As of 2008[update], the U.S. Air Force committed to lease Cape Canaveral Air Force Station Space Launch Complex 36 to Space Florida for future use by the Athena III launch system.[5] It is not known if the plan was subsequently implemented.[needs update]