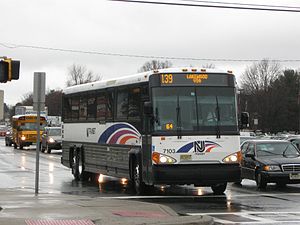 New Jersey Transit operates interstate bus routes in northern New Jersey, most terminating at the Port Authority Bus Terminal (PABT) in Midtown Manhattan. There are several routes to the George Washington Bridge Bus Terminal and one serves Lower Manhattan via the Holland Tunnel. Some of the routes that use the Lincoln Tunnel to the PABT travel along the marginal road of Route 495 allowing for local connections in Hudson County.

Below, the routes are listed by division, region, and number.

Northern Division routes go to points in Bergen, Hudson, and Passaic counties in New Jersey, along with Orange County in New York.

From the George Washington Bridge Bus Terminal and GWB Plaza

To Hudson and Bergen from PABT

Central Division routes go to points south of the Essex/Passaic county line, and west of the Passaic River.

These routes are assigned to Hilton Bus Garage in Maplewood and operate to and from the Port Authority Bus Terminal. These are exact fare routes.

To the Raritan Valley

These routes are assigned to the Ironbound Garage in Newark and run to and from the Port Authority Bus Terminal.

To points south of the Raritan River

These routes are assigned to the Howell Garage in Howell Twp. with some rush hour service on some lines operated by Academy Bus, and run to and from the Port Authority Bus Terminal. All routes operate during weekday peak hours only, except for the 137 and 139.

This list includes routes that have been renumbered or are now operated by private companies.