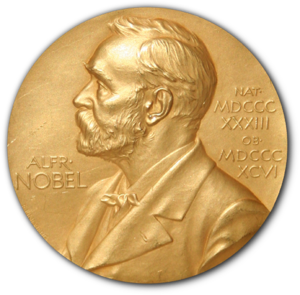 The Nobel Prizes (Swedish: Nobelpriset, Norwegian: Nobelprisen) are prizes awarded annually by the Royal Swedish Academy of Sciences, the Swedish Academy, the Karolinska Institute, and the Norwegian Nobel Committee to individuals and organizations who make outstanding contributions in the fields of chemistry, physics, literature, peace, and physiology or medicine.[1] They were established by the 1895 will of Alfred Nobel, which dictates that the awards should be administered by the Nobel Foundation. The Nobel Memorial Prize in Economic Sciences was established in 1968 by the Sveriges Riksbank, the central bank of Sweden, for contributions to the field of economics. Each recipient, or "laureate", receives a gold medal, a diploma, and a sum of money, which is decided by the Nobel Foundation, yearly.[2]

Each prize is awarded by a separate committee; the Royal Swedish Academy of Sciences awards the Prizes in Physics, Chemistry, and Economics, the Karolinska Institute awards the Prize in Physiology or Medicine, and the Norwegian Nobel Committee awards the Prize in Peace.[3] Each recipient receives a medal, a diploma and a monetary award that has varied throughout the years.[2] In 1901, the recipients of the first Nobel Prizes were given 150,782 SEK, which is equal to 7,731,004 SEK in December 2007. In 2008, the laureates were awarded a prize amount of 10,000,000 SEK.[4] The awards are presented in Stockholm in an annual ceremony on December 10, the anniversary of Nobel's death.[5]

In years in which the Nobel Prize is not awarded due to external events or a lack of nominations, the prize money is returned to the funds delegated to the relevant prize.[6] The Nobel Prize was not awarded between 1940 and 1942 due to the outbreak of World War II.[7]

Between 1901 and 2012, the Nobel Prizes and the Nobel Memorial Prize in Economic Sciences were awarded 555 times to 863 people and organizations. With some receiving the Nobel Prize more than once, this makes a total of 835 individuals and 21 organizations. Four Nobel laureates were not permitted by their governments to accept the Nobel Prize. Adolf Hitler forbade three Germans, Richard Kuhn (Chemistry, 1938), Adolf Butenandt (Chemistry, 1939), and Gerhard Domagk (Physiology or Medicine, 1939), from accepting their Nobel Prizes, and the government of the Soviet Union pressured Boris Pasternak (Literature, 1958) to decline his award. Two Nobel laureates, Jean-Paul Sartre (Literature, 1964) and Lê Ðức Thọ (Peace, 1973), declined the award; Sartre declined the award as he declined all official honors, and Lê declined the award due to the situation Vietnam was in at the time.