Polls have been the most prominent form of championship selection since the inception of the AP Poll in 1936. The following systems have at one point in their history have named Pitt as a national champion or are still active today. Retroactive designations are marked in italics. 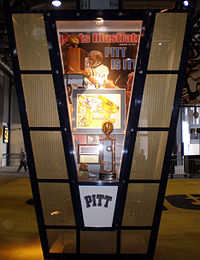 The following table summarizes the source and totals for Pitt's national championship seasons.

Pitt's season-by-season completion leaders at quarterback since 1974 are depicted in the following table.[13]