List of Presidents of the United States by age

This is a list of presidents of the United States by age. The first table charts the age of each United States president at the time of presidential inauguration (first inauguration if elected to multiple and consecutive terms), upon leaving office, and at the time of death. Each president's lifespan (age at death) is measured in two ways, to allow for the differing number of leap days that each experienced. The first figure is the number of days between the president's date of birth and date of death, allowing for leap days; in parentheses, the same period is given in years and days, with the years being the number of whole years that the president lived, and the days being the number of days since the last birthday. Where the president is still living, lifespan is calculated up to July 11, 2020. The second table includes those presidents who had the distinction among their peers of being the oldest living president, and charts both when they became and ceased to be oldest living.

See also: Lifespan timeline of Presidents of the United States 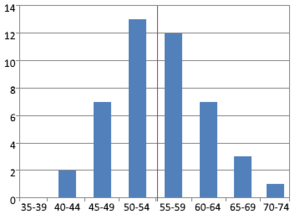 Six U.S. presidents have lived into their 90s. They are (in order of birth):

On seven occasions, the oldest living president has acquired this distinction during his term in office. In the cases of John Adams, Ulysses S. Grant, Theodore Roosevelt, Herbert Hoover and Richard Nixon, this happened at the same time as their becoming the only living president; in the cases of Andrew Jackson and Benjamin Harrison, the only other living president at the time was a younger predecessor (John Quincy Adams and Grover Cleveland respectively).