List of Presidents of the United States by home state

These lists give the states of primary affiliation, states of birth and places of birth of the Presidents of the United States. 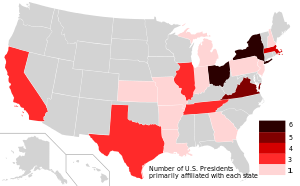 States shown by number of US Presidents primarily affiliated with them.

A list of US Presidents including the state with which each was primarily affiliated, due to residence, professional career, and electoral history. This is not necessarily the state in which the president was born.

Note: The flags presented for the states are the present day flags, which were not necessarily adopted in the times of the earliest presidents.

States of primary affiliation by president

Presidents by state of primary affiliation

A list of all 44 presidents based on residence and birth, with priority given to residence. Only 18 out of the 50 states are represented. Presidents with an asterisk (*) did not primarily reside in their respective birth states (they were not born in the state listed below). 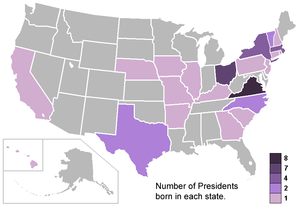 States shown by number of US Presidents born there.

Presidents by state of birth

Communities where presidents were born

Presidents who did not primarily reside in their respective birth states

As of 2012, 19 out of 43 individuals (44%) – accounting for Grover Cleveland's two non-consecutive terms—served as President after officially residing in a different place than their birth.

The following Presidents were born British subjects before the establishment of the United States:

The following Presidents were born British subjects, as well as American citizens, after the establishment of the United States: