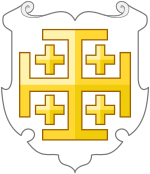 This is a list of Queens of Jerusalem, from 1099 to 1291, as well as claimants to the title up to the present day.

Throughout 200 years of its existence, the Kingdom of Jerusalem had 1 protector, 11 reigning kings, 5 queens regnant, and 7 jure uxoris kings. But there were only 6 women who used the title of Queen consort of Jerusalem, wives of the Latin kings of Jerusalem, and 1 woman who was an untitled consort. Nevertheless, many of them were highly influential in the country's history, having ruled as regents for their minor children and heirs, as well has having a great influence over their spouses. Many kings of Jerusalem died unmarried or as a child.

This is a list of queens regnant of Jerusalem who held to the throne by their own right: