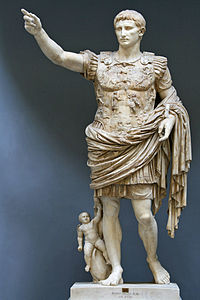 Roman Emperors and Empresses were rulers of the Roman Empire, wielding power over its citizens and military. The empire was developed as the Roman Republic invaded and occupied most of Europe and portions of northern Africa and western Asia. Under the republic, regions of the empire were ruled by provincial governors answerable to and authorised by the "Senate and People of Rome". Rome and its senate were ruled by a variety of magistrates – of whom the consuls were the most powerful. The republic ended, and the emperors were created, when these magistrates became legally and practically subservient to one citizen with power over all other magistrates. Augustus, the first emperor, was careful to maintain the facade of republican rule, taking no specific title for his position[1] and calling the concentration of magisterial power Princeps Senatus (the first man of the senate).[1] This style of government lasted for 300 years, and is thus called the Principate era. The modern word 'emperor' derives from the title imperator, which was granted by an army to a successful general; during the initial phase of the empire, it still had to be earned by the 'Princeps'. The term emperor is a modern construction, used when describing rulers of the Roman Empire because it emphasises the strong links between the ruler and the army (on whose support the ruler's power depended), and does not discriminate between the personal styles of rule and titles in different phases of the Empire.

In the late 3rd century, after the Crisis of the Third Century, Diocletian formalised and embellished the recent manner of imperial rule, establishing the so-called 'Dominate' period of the Roman Empire. This was characterised by the explicit increase of authority in the person of the Emperor, and the use of the style 'Dominus Noster' ('Our Lord'). The rise of powerful Barbarian tribes along the borders of the empire and the challenge they posed to defense of far-flung borders and unstable imperial succession led Diocletian to experiment with sharing imperial titles and responsibilities among several individuals - a partial reversion to pre-Augustian Roman traditions. For nearly two centuries thereafter there was often more than one emperor at a time, frequently dividing the administration of the vast territories between them. As Henry Moss warned, "Yet it is important to remember that in the eyes of contemporaries the Empire was still one and indivisible. It is false to the ideas of this time to speak of 'the Eastern and Western Empire'; the two halves of Empire were thought of as 'the Eastern, or Western parts' (partes orientis vel occidentis.)"[2] However, after the death of Theodosius I (395), the split became firmly entrenched (see: Western and Eastern)[3] The last pretense of such division was formally ended by Zeno after the death of Julius Nepos in 480. For the remaining thousand years of Roman history there would only ever be one legitimate senior emperor, ruling from Constantinople and maintaining claim to the increasingly unstable territories in the west. After 480, multiple claims to be the imperial title of Augustus (or Basileus for Greek speakers) necessarily meant civil war, although the experiment with designating junior emperors (called now Caesars), usually to indicate the intended successor, occasionally reappeared.

The Empire and chain of emperors continued until the death of Constantine XI and the capture of Constantinople by the Ottoman Empire in 1453.[4] The use of the terms "Byzantium," "Byzantine Empire," and "Byzantine Emperor" to refer to the medieval period of the Empire has been common, but not universal, among Western scholars since the 18th century, and continues to be a subject of specialist debate today.[5]

This article is about legitimate Roman emperors. For other individuals claiming the title of Emperor, see List of Roman usurpers.

The emperors listed in this article are those generally agreed to have been 'legitimate' emperors, and who appear in published regnal lists.[6][7][8] The word 'legitimate' is used by most authors, but usually without clear definition, perhaps not surprisingly, since the emperorship was itself rather vaguely defined legally. In Augustus' original formulation, the princeps was selected by either the Senate or "the people" of Rome, but quite quickly the legions became an acknowledged stand-in for "the people." A person could be proclaimed as emperor by their troops or by "the mob" in the street, but in theory needed to be confirmed by the Senate. The coercion that frequently resulted was implied in this formulation. Furthermore, a sitting emperor was empowered to name a successor and take him on as apprentice in government and in that case the Senate had no role to play, although it sometimes did when a successor lacked the power to inhibit bids by rival claimants. By the medieval (or "Byzantine") period, the very definition of the Senate became vague as well, adding to the complication.[9]

Lists of legitimate emperors are therefore partly influenced by the subjective views of those compiling them, and also partly by historical convention. Many of the 'legitimate' emperors listed here acceded to the position by usurpation, and many 'illegitimate' claimants had a legitimate claim to the position. Historically, the following criteria have been used to derive emperor lists:

So for instance, Aurelian, though acceding to the throne by usurpation, was the sole and undisputed monarch between 270–275 AD, and thus was a legitimate emperor. Gallienus, though not in control of the whole Empire, and plagued by other claimants, was the legitimate heir of (the legitimate emperor) Valerian. Claudius Gothicus, though acceding illegally, and not in control of the whole Empire, was the only claimant accepted by the Senate, and thus, for his reign, was the legitimate emperor. Equally, during the Year of the Four Emperors, all claimants, though not undisputed, were at some point accepted by the Senate and are thus included; conversely, during the Year of the Five Emperors neither Pescennius Niger nor Clodius Albinus were accepted by the Senate, and are thus not included. There are a few examples where individuals were made co-emperor, but never wielded power in their own right (typically the child of an emperor); these emperors are legitimate, but are not included in regnal lists, and in this article are listed together with the 'senior' emperor.

After 395, the list of emperors in the East is based on the same general criteria, with the exception that the emperor only had to be in undisputed control of the Eastern part of the empire, or be the legitimate heir of the Eastern emperor.

The situation in the West is more complex. Throughout the final years of the Western Empire (395–480) the Eastern emperor was considered the senior emperor, and a Western emperor was only legitimate if recognized as such by the Eastern emperor. Furthermore, after 455 the Western emperor ceased to be a relevant figure and there was sometimes no claimant at all. For the sake of historical completeness, all Western Emperors after 455 are included in this list, even if they were not recognized by the Eastern Empire;[10] some of these technically illegitimate emperors are included in regnal lists, while others are not. For instance, Romulus Augustulus was technically a usurper who ruled only the Italian peninsula and was never legally recognized. However, he was traditionally considered the "last Roman Emperor" by 18th and 19th century western scholars and his overthrow by Odoacer used as the marking point between historical epochs, and as such he is usually included in regnal lists. However, modern scholarship has confirmed that Romulus Augustulus' predecessor, Julius Nepos continued to rule as Emperor in the other Western holdings and as a figurehead for Odoacer's rule in Italy until Nepos' death in 480. Since the question of what constitutes an emperor can be ambiguous, and dating the "fall of the Western Empire" arbitrary, this list includes details of both figures.

Year of the Four Emperors and Flavian dynasty

Main articles: Year of the Four Emperors and Flavian dynasty

Year of the Five Emperors and Severan dynasty

Crisis of the Third Century and Gordian dynasty

The last emperors of the Western Empire

See also: Komnenos and Byzantine Empire under the Komnenos dynasty

See also: Komnenos and Byzantine Empire under the Komnenos dynasty

See also: Angelos and Byzantine Empire under the Angelos dynasty