List of Speakers of the United States House of Representatives 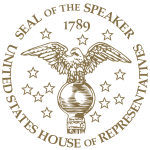 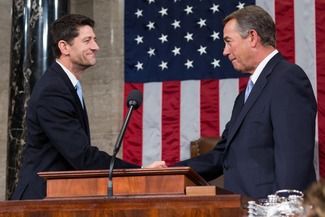 The incumbent, Speaker Paul Ryan, shakes hands with his predecessor, John Boehner, as he assumes the office in October 2015.

There have been 54 speakers of the United States House of Representatives since the formation of the office in 1789 until present, from Frederick Muhlenberg to Paul Ryan, the incumbent. As the presiding officer over the United States House of Representatives, the speaker is second in line for the presidency, after the Vice President. Unlike some Westminster system parliaments, in which the office of Speaker is considered non-partisan, in the United States, the Speaker of the House is a leadership position and the office-holder actively works to set the majority party's legislative agenda. The Speaker usually does not personally preside over debates, instead delegating the duty to members of the House from the majority party. The Speaker usually does not participate in debate and rarely votes. Aside from duties relating to heading the House and the majority political party, the Speaker also performs administrative and procedural functions, and represents his or her Congressional district.

Elected by a simple majority of the members of the House, the Speaker is traditionally their party's leader in the chamber, and unlike the other House leadership, the speaker is a constitutional officer as established by Article One of the United States Constitution. At the beginning of a new Congress every two years, the House elects a speaker, either the incumbent, or a new one, depending on party composition and membership of incumbents. The most recent election to occur mid-way through a Congress occurred on October 29, 2015, when it elected Congressman Paul Ryan of Wisconsin. While every speaker has been a sitting member of Congress, the Constitution makes no requirements of House membership to hold the office.

The longest serving speaker was Sam Rayburn of Texas, who served on three separate occasions in the 1940s, 50s, and 60s. One Speaker, James K. Polk, went on to become the 11th President of the United States; both Schuyler Colfax and John Nance Garner later became Vice President. Paul Ryan ran for the office, but was defeated (prior to election as Speaker).

List of Speakers of the United States House of Representatives

This list includes the congressional district and political affiliation of each speaker as well as the number of their Congress and time they spent in the position.

a Note: Nathaniel Banks, a former Democrat originally elected as a member of the Know Nothing Party, had come to be associated with the Republicans by the time the 34th Congress convened. Because the Republicans did not command a majority in Congress and Banks did not receive any votes from Democrats or Southern Know Nothings, Banks, after two months of deadlocked balloting, could only be elected on the 133rd ballot after a motion was passed allowing the election of a Speaker by plurality vote.[2]

This list is based on the difference between dates; if counted by number of calendar days all the figures would be one greater. Time after adjournment of one Congress but before the convening of the next Congress is not counted. For example, Nathaniel Macon was Speaker in both the 8thth and 9th Congresses, but the eight-month gap between the two Congresses is not counted toward his service.

Sam Rayburn and Henry Clay are the only people to have served as Speaker of the House for more than ten years.

Theodore M. Pomeroy served as Speaker of the House for one day after Speaker Schuyler Colfax resigned to become Vice President of the United States; Pomeroy's term as a Member of Congress ended the next day.

Sam Rayburn, Henry Clay, Thomas Brackett Reed, Joseph William Martin, Jr., Frederick Muhlenberg, and John W. Taylor are the only Speakers of the House to have ever served in non-consecutive Congresses (i.e. another Speaker served in between each tenure).

Number of Speakers per State

Since the retirement of John Boehner on October 29, 2015 there are four former living speakers. Picture below, in order of service: