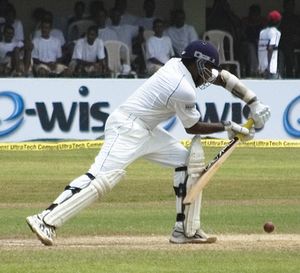 Test cricket is the oldest form of cricket played at international level.[1] A Test match takes place over a period of five days, and is played by teams representing Full Member nations of the International Cricket Council (ICC).[2][3] Sri Lanka obtained Full Member status of the ICC in 1981, becoming the eighth nation eligible to play Test cricket.[4] The Sri Lanka national cricket team played their first Test match on 17 February 1982 against England, and recorded their first victory in a match against India on 6 September 1985.[5] Since then, they have played nearly 200 matches, against every other Test-playing nation.[6] Sri Lanka holds the world record for the highest team score, which was established against India in 1997.[7] The highest partnership in Test cricket was also established by two Sri Lankan batsmen; Mahela Jayawardene and Kumar Sangakkara.[8] Sri Lankan players also hold the highest partnership scores for the second, third, and fourth wickets.[9]

Top order batsman and former captain Jayawardene holds several Sri Lankan batting records. He has scored the most runs for Sri Lanka in Test cricket, and is the record holder for the highest number of centuries as well as the highest number of half-centuries. The 374 Jayawardene made against South Africa in 2006 is the highest individual score by a Sri Lankan cricketer, surpassing the previous best of 340 by Sanath Jayasuriya, which was established in 1997.[10] It is also the fourth-highest individual score in Test cricket. Jayawardene and Jayasuriya are the only Sri Lankan players who have scored triple centuries.[11]

Muttiah Muralitharan, who was hailed by the Wisden Cricketers' Almanack in 2002 as the "best bowler ever" in Test cricket, dominates the bowling records for Sri Lanka.[12] He is the world record holder for the highest number of wickets, the most number of five wickets per innings, as well as the most number of ten wickets per match.[13] Muralitharan also holds the records for the best bowling average, best figures in an innings, best figures in a match, and best figures in a series. He missed an opportunity to capture all ten wickets in an innings in 2002 against Zimbabwe, when Chaminda Vaas took the last wicket after Muralitharan had taken the previous nine.[14] The Sri Lankan team won an ODI series against Australia in Australia in 2010. However, they are yet to register a Test match win and an ODI series win against India in India, as of 2013.

The top five records are listed for each category, except in "team wins, losses, and draws" and "highest wicket partnerships". Tied records for the fifth place are listed as well. Explanations of the general symbols and cricketing terms used in the list are given below. Specific details are provided in each category where appropriate.

A tie can occur when the scores of both teams are equal at the conclusion of play, provided that the side batting last has completed their innings.[15] Only two matches have ended in a tie in Test cricket history, neither of which involved Sri Lanka.[16]

Most runs in an innings

Fewest runs in an innings 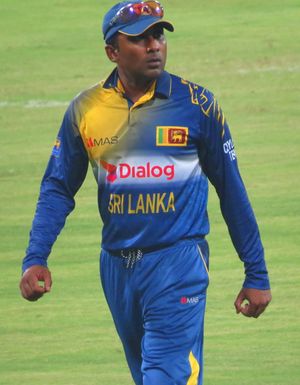 Kumar Sangakkara is the fifth-highest scoring batsman in Test cricket.[31] Apart from these five players[32]

In cricket, batting average is the mean number of runs scored per innings. It is calculated by dividing total runs scored (including innings where he remained not out) by the number of times the batsman has been dismissed.[33]

Most ducks in career

"Duck" refers to a batsman dismissed without scoring.[39]

Most runs in a series 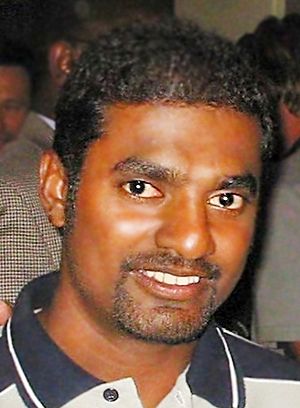 Most wickets in a career

Muralitharan, who is the highest wicket-taker in Test cricket, has taken 5 wickets for the ICC World XI team during a match in 2005, which are not included in this list.[42] Muralitharan and Shane Warne—who ranks second with 708 wickets—are the only bowlers who have captured more than 700 Test wickets.[43]

Bowling average is the measurement of mean runs conceded per wicket. In calculating this, total amount of runs conceded by the bowler is divided by the number of wickets captured.[33]

Best figures in an innings

Best figures in a match

The Sri Lankan record of 16 wickets for 220 runs set by Muttiah Muralitharan against England is the fifth-best figures by a bowler in a single Test match.[49]

Best figures in a series

Most five-wicket hauls in an innings

Taking five or more wickets in a single innings (called a five-wicket haul, fifer or five-for) is considered a notable achievement for a bowler.[52] Muralitharan is well ahead of other bowlers by number of five-wicket hauls in Tests with 67 to his name; Australian cricketer Shane Warne ranks in second place with 37.[53]

Most ten-wickets in a match

Muralitharan has taken ten or more wickets per match on more occasions than any other bowler in Test cricket. He has performed this feat 22 times, more than double the number of the bowler ranking second—Shane Warne, who has achieved this on 10 occasions.[55]

Most catches in a career

A "catch" occurs when a ball hit by the batsman in the air is held by a fielder within the field of play, before it hits the ground. In such a case, the batsman is ruled out caught.[57] 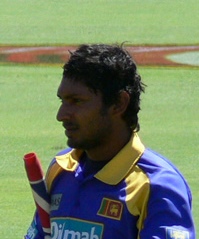 Former Sri Lankan captain Kumar Sangakkara has assisted in the highest number of dismissals as wicketkeeper.

A wicketkeeper can assist in the dismissal of a batsman by taking a catch or stumping.[59] A catch taken by the wicketkeeper means the batsman will be ruled out caught, although it may be referred to as "caught behind". A stumping occurs when the wicketkeeper catches a ball delivered by the bowler (provided it is a legal delivery) and putting down the batsman's wicket while he is out of his ground.[60]

Most matches played as captain

Most matches won as captain

Sri Lanka holds the highest partnerships in Test cricket for any wicket and, with the records for the second, and third wickets.[64]