This is a list of Swedish monarchs, that is, the Kings and ruling Queens of Sweden, including regents and viceroys of the Kalmar Union, up to the present time. 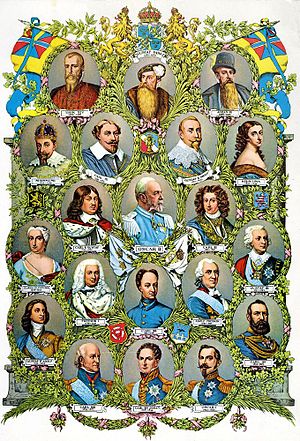 The earliest record of what is generally considered to be a Swedish king appears in Tacitus' work Germania, c. 100 AD (the king of the Suiones). However, due to scant and unreliable sources before the 11th century, lists of succession traditionally start in the 10th century with king Olof Skötkonung, and his father Eric the Victorious, who also were the first Swedish kings to be baptized. There are, however, lists of Swedish pagan monarchs with far older dates, but in many cases these kings appear in sources of disputed historical reliability. These records notably deal with the legendary House of Yngling, and based on the Danish chronicler Saxo Grammaticus, Erik Segersäll and Olof Skötkonung have often been classified as belonging to the Swedish house of Ynglings. However, according to Icelandic sources this line of kings was broken (see Ingjald and Ivar Vidfamne), and trace them back to Sigurd Ring and Ragnar Lodbrok (whom Saxo, on the other hand, considered to belong to the House of Yngling). As there is no evidence that Eric and Olof ever used the Yngling name themselves, modern historians instead refer to their family as the House of Munsö, the Old Dynasty or the House of Uppsala.

In the 16th century, Johannes Magnus constructed a mythical line of Swedish kings, beginning with Magog, the son of Japheth, to demonstrate the antiquity of the Swedish throne. On the basis of his list, Eric XIV and Charles IX adopted their high ordinals; previous monarchs with those names are traditionally numbered counting backward from Eric XIV and Charles IX. In contemporary Swedish usage, medieval kings are usually not given any ordinal at all.

In addition to the list below, the Swedish throne was also claimed by the kings of the Polish-Lithuanian Commonwealth from 1599 to 1660. Following his abdication Sigismund continued to claim the throne from 1599 to his death in 1632. After his death the claim was continued by his sons, Vladislaus IV (from 1632 to 1648) and John II Casimir (from 1648 to 1660).

The Swedish monarchs have been of the House of Bernadotte since 1818, based on the Swedish Act of Succession of 1810. The Constitution of 1809 assumed that the monarch would appoint his Cabinet as he saw fit, but growing calls for democratisation during the end of the 19th century made such an idea impossible to sustain. 1917 marks the end of any real political power for the Swedish monarch. The Constitution of 1974 codifies this development by removing all decision-making powers from the monarch, making it both de facto and de jure a ceremonial position. Today, it is the Government, not the King, which holds chief executive power.

In 1980, the rule of succession was changed from agnatic to absolute primogeniture, to the benefit of Princess Victoria (born 1977), the current heir apparent.

Monarchs and Regents of Sweden

House of Stenkil and contemporary

Houses of Sverker and Eric

Monarchs during the Kalmar Union period and Regents (Riksföreståndare)

House of Palatinate-Zweibrücken, a branch of the House of Wittelsbach

House of Holstein-Gottorp, a branch of the House of Oldenburg