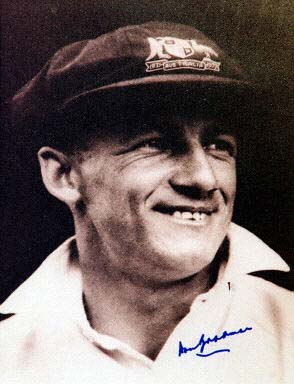 Australian Donald Bradman is one of only four players in Test cricket to have scored 300 or more runs in a single innings on more than one occasion. The others are Brian Lara and Chris Gayle of the West Indies and Virender Sehwag of India.

A triple century (an individual score of 300 or more) in Test cricket has been scored on 28 occasions by 24 different batsmen from eight of the ten Test-cricket playing nations.[1] No player from Bangladesh or Zimbabwe has scored 300.[1]

Brian Lara and Chris Gayle of the West Indies, Donald Bradman of Australia and Virender Sehwag of India are the only batsmen to reach 300 more than once.[1] Lara's 400 not out against England in 2004, his second Test triple-century, is the highest score in Test cricket and the only instance of a Test quadruple century; Lara is also the only player to have surpassed 350 twice. Bradman also scored 299 not out against South Africa in 1932. Sehwag also scored 293 off 254 balls in the third Test between Sri Lanka and India in December 2009.[1]

Triple centuries and above