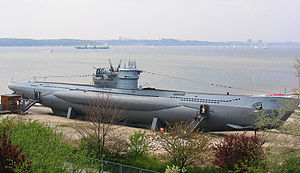 The anglicized word U-boat is usually only used as reference for German submarines in the two World Wars and therefore postwar submarine in the Bundesmarine and later German Navy are not included.

In the period between the two World Wars the Reichsmarine of the Weimar Republic was not allowed to build submarines according to the Treaty of Versailles; development was undertaken secretly through a Dutch company NV Ingenieurskantoor voor Scheepsbouw before the mid-1930s. The terms of the Anglo-German naval agreement acknowledged the official building of new U-boats.

This list contains the German U-boats types prior or during the First World War.

This list contains the German U-boats types prior or during the Second World War.