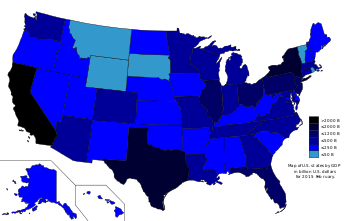 This is a list of U.S. states sorted by their gross state product (GSP). GSP is the state counterpart to a country's gross domestic product (GDP), the most comprehensive measure of national economic activity. The United States Bureau of Economic Analysis (BEA) derives GSP for a state as the sum of the GSP originating in all the industries in the state.

The BEA defines an industry's GSP, or its value added, as equal to its gross output (sales or receipts and other operating income, commodity taxes, and inventory change) minus its intermediate inputs (consumption of goods and services purchased from other U.S. industries or imported). The GSP data by industry and state is consistent with gross domestic product (GDP) in the national income and product accounts, and with the GDP by industry accounts.

The list presents data for 2015 from the BEA. Historical data from 2002 to 2006 is also listed below. The figures are in millions of nominal dollars, unadjusted purchasing power disparities between the states.

Current data by industry and for the last 5 years (complete with rankings) are available via the STATS America States in Profile. 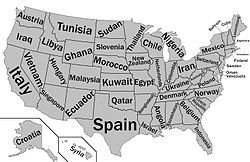 Comparison between U.S. states and countries by GDP in 2012. 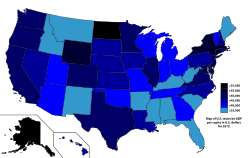 The list below provides data compiled by US Debt Clock on state GSP (Gross State Product) for 2015, Quarter 2.

Template:Economies of the United States