This list encompasses all rulers and leaders of what is today Ukraine, from ancient to modern times.

The term "Ukrainians" is used according to the modern definition of "the inhabitants of the land Ukraine"[1] not just those who identify with the ethnic group. This list includes only local rulers whose seat of power was located in the modern Ukraine and only the rulers whose power was derived directly from the people of the territory at the time, and does not include the governors who received their authority from some foreign powers (as during Lithuanian, Polish, Hungarian, Austrian, Russian, Czechoslovakian and Romanian overlordship).

This is not a list of sovereigns. Throughout its history the territory of modern Ukraine had various forms of governance from monarchies to democratic republics.

Scythia was a loose state that originated as early as the 8th century BC. Little is known of them and their rulers. Most detailed description came down to us from Herodotus.

The shores of Crimea were settled by Greeks since the 7th century BC. The kingdom was established around 480 BC. It was ruled by three consecutive dynasties: Archaenactidae (480 BC – 438 BC), Spartocids (438 BC – 108 BC), and Pontids (108 BC – 16 BC). After Pontids the territory became a Roman client kingdom.

In Eastern Europe the The Great Migration Period kicked off with the descent of the Goths from the Baltic region into the territory of modern Ukraine, about AD 200. They either took over or assimilated with the local Slavic tribes. The Goths were in turn pushed out by aggressively encroaching Huns, about 375. The Goths went on to conquer Southern Europe and the Huns moved to the Balkans and created a Hunnic Empire which lasted for a hundred years. After splitting of the Empire, some of the Huns moved back north in the territories of modern Ukraine and formed Patria Onoguria, now known as Old Great Bulgaria. In the 7th century Onoguria largely defected to Khazaria – an expanding Turkic state centered in the North Caucuses which controlled the Eurasian steppe until the 9th century.

In 238, the Goths for the first time passed the Danube, and took to the Black Sea. The division of the Goths (Thervingi-Vesi and Greuthungi-Ostrogothi) is first attested in 291.

The Balti dynasty, Balth(e)s, Baltungs, or Balthings, existed among the Tervingi ("forest people"), called later the Visigothi. The names of the Drevlyans and the Gothic Tervingi in Ukraine have often been adduced as parallels to agac-ari ("forest men" in Turkic).

The Amali dynasty, Amals, Amaler, or Amalings of the Greuthungi ("steppe dwellers" or "people of the pebbly coasts"), called later the Ostrogothi.

According to Zakarius Rhetor and Priscus Rhetor, Patria Onoguria was a vulgar statelet in alliance with Byzantium established in 463 around Azov having been forced west upon the Akatziroi by the Sabirs who in turn were being attacked. Its 7th century period is commonly referred to as Old Great Bulgaria (~600–~690).

Khazar Khaganate controlled much of what is today southern and eastern Ukraine until the 10th century.

Legendary and historical rulers of Kyiv

The Rurikids were descendants of Rurik (Hrørekr), a Varangian pagan konung or chieftain, who supposedly was of haplogroup N1c1, which is common among Finno-Ugric peoples and not so rare in Baltic region.[6]

All the rulers of Kievan Rus' before the conversion of Vladimir I and all the country to Christianity are Pagan rulers, except Olga of Kiev.

After the Council of Liubech in 1097 Kievan Rus' entered a feudal period and was divided into principalities ruled by the Rurikid family princes who were in a constant power struggle with each other. Major principalities were: Galicia-Volhynia, Kiev, Chernigiv, and Pereyaslavl. In the period of 1240–1362, the three latter ones were forced to accept the Golden Horde overlordship.

Main article: List of rulers of Galicia and Volhynia

Galicia-Volhynia was a Ruthenian (Ukrainian) state in Galicia and Volhynia. Depending on the title of the ruler it was called either principality or kingdom. The first king, Coloman of Galicia-Lodomeria, was crowned in 1215, although the first nominal king of Galicia was Andrew II of Hungary, the son of Béla III of Hungary, who reigned from 1188 to 1190.

In 1349, Liubartas lost all territories, except for eastern Volhynia, to Casimir III of Poland. In 1366, a Polish-Lithuanian treaty was signed: eastern Volhynia with Lutsk retained under Liubartas' rule (the Grand Duchy of Lithuania), while Galicia, western Volhynia, and western Podolia were annexed by the Crown of the Kingdom of Poland.

In early 1320s, a Lithuanian army led by Gediminas defeated a Slavic army led by Stanislav of Kiev at the Battle on the Irpen' River, and conquered the city. The Tatars, who also claimed Kiev, retaliated in 1324–1325, so while Kiev was ruled by a Lithuanian prince, it had to pay a tribute to the Golden Horde. Finally, as a result of the Battle of Blue Waters in 1362, Kiev and surrounding areas were incorporated into the Grand Duchy of Lithuania by Algirdas, Grand Duke of Lithuania.

Crimean Tatars were not of the Ukrainian ethnos. Their Crimean Khanate ruled a large part of modern Ukraine, with a capital at Bakhchisaray. 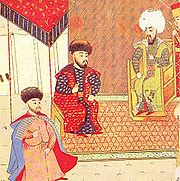 A Hetman was a military and civil leader, democratically elected by the Cossacks.

Hetmans and commanders of Ukrainian Cossacks

Several Cossack regiments were operating in Ukraine at this time that were largely independent of each other, so some of the Hetmans' tenures overlap.

Hetmans of the Cossack state

Following the Khmelnytsky uprising a new Cossack republic, the Hetmanate, was formed.

Hetmans during the Ruin

The Ruin (1660–1687) was a time in Ukrainian history when the country fell into disarray and chaos. Afterwards, the Cossack state emerged as a vassal of the Russian Empire. During this period a number of hetmans stayed in power for short periods of time and often controlled only parts of the country. Moreover, the Treaty of Andrusovo (1667) split the Cossack Hetmanate along the Dnieper River into Left-bank Ukraine, which enjoyed a degree of autonomy within the Tsardom of Russia; and Right-bank Ukraine which remained part of the Polish-Lithuanian Commonwealth, at times (1672–1699) occupied by the Ottoman Empire.

After the dissolution of the Cossack Hetmanate, a new Malorossiyan collegium was established in 1764, and the Zaporozhian Host was disbanded in 1775. As a result of the second and third Partitions of Poland in 1793 and 1795, eastern and central parts of Ukraine were incorporated directly into the Russian Empire. Western Ukraine was annexed into the Habsburg Monarchy earlier, in the following order: Carpathian Ruthenia (1526), Galicia (1772), and Bukovina (1775).

The Ukrainian People's Republic (UNR, 1917–1921) was formed after the Russian Revolution of 1917, and lasted until the Peace of Riga between Poland and Soviet Russia in March 1921. The leadership title varied and, despite a rather widespread misconception, none of them had the official title of president.

Chairmen of the Central Council

The Central Council (Tsentral’na rada) was the representative body governing the UNR.

Hetman of the Ukrainian State

A very short lived Hetmanate was established by Pavlo Skoropadskyi in 1918.

Chairmen of the Directory

President of the Ukrainian National Republic

Prime Minister of the Ukrainian State

Ukraine was incorporated into the Union of Soviet Socialist Republics on 30 December 1922.

First Secretary of the Central Committee

Executive Secretary of the Central Committee

First Secretaries of the Communist Party

General Secretaries of the Central Committee

First Secretaries of the Central Committee