Flag of an
Army four-star general

There have been 231 four-star generals in the history of the U.S. Army. Of these, 213 achieved that rank while on active duty in the U.S. Army; eight were promoted after retirement; five were promoted posthumously; and one (George Washington) was appointed to that rank in the Continental Army, the U.S. Army's predecessor. Generals entered the Army via several paths: 150 were commissioned via the U.S. Military Academy (USMA), 41 via Reserve Officer Training Corps (ROTC) at a civilian university, 16 via direct commission, 13 via Officer Candidate School (OCS), 7 via ROTC at a senior military college, one via ROTC at a military junior college, one via the Army National Guard (ARNG), one via the aviation cadet program, and one via battlefield commission.

Entries in the following list of four-star generals are indexed by the numerical order in which each officer was promoted to that rank while on active duty, or by an asterisk (*) if the officer did not serve in that rank while on active duty in the U.S. Army. Each entry lists the general's name, date of rank,[1] active-duty positions held while serving at four-star rank,[2] number of years of active-duty service at four-star rank (Yrs),[3] year commissioned and source of commission,[4] number of years in commission when promoted to four-star rank (YC),[5] and other biographical notes.[6]

The grade of General of the Armies of the United States was revived in 1866, under the name "General of the Army of the United States" to honor the Civil War achievements of Ulysses S. Grant, the commanding general of the U.S. Army (CGUSA).[39] When Grant resigned his commission to become President in 1869, William T. Sherman was promoted to fill the vacant grade. Congress specified in 1870 that the rank would expire upon Sherman's retirement, but made an exception in 1888 to promote an ailing Philip H. Sheridan. This title is not to be confused with the later five-star rank of General of the Army.[40]

In 1917, the rank of general was recreated in the National Army, a temporary force of conscripts and volunteers authorized for the duration of the World War I emergency. To give American commanders parity of rank with their Allied counterparts, Congress allowed the President to appoint two emergency generals in the National Army, specified to be the chief of staff of the Army (CSA), Tasker H. Bliss and later Peyton C. March; and the commander of United States forces in France, John J. Pershing.[41] When March replaced Bliss as chief of staff, Bliss was continued in four-star rank by brevet as the U.S. military representative to the Supreme War Council.[42] In contrast to the previous grade of general held by Grant, Sherman, and Sheridan, which was a permanent promotion, this new rank was a temporary appointment that was lost when the officer vacated the position bearing that rank, and while Pershing was ultimately advanced to General of the Armies in 1919, March and Bliss reverted to their permanent grades of major general in the Regular Army when the National Army disbanded in 1920.[43]

In 1929, the temporary rank of general in the Regular Army was reauthorized for the office of chief of staff, whose occupant reverted to major general at the end of his term but was allowed to retire as a full general. When the draft force was reconstituted for World War II as the Army of the United States in 1941, the President was authorized to appoint as many temporary generals in that organization as he deemed necessary. As with the National Army emergency generals, these appointments expired after the end of the war, although postwar legislation allowed officers to retire in their highest active-duty rank.[44]

The modern rank of general was established by the Officer Personnel Act of 1947, which authorized the President to designate certain positions of importance to carry that rank. Officers appointed to such positions bear temporary four-star rank while so serving, and are allowed to retire at that rank if their performance is judged satisfactory.[45] The total number of active-duty four-star generals in the Army is limited to a fixed percentage of the number of Army general officers serving at all ranks.[46]

Within the Army, the chief of staff (CSA) and vice chief of staff (VCSA) are four-star generals by statute. Since World War II, the commanders of the Army formations in Europe (USAREUR) and East Asia (FECOM/USFK) have been designated four-star generals by reason of importance. Other designated four-star Army commands have included the various training, readiness, and materiel organizations.

The Army also competes with the other services for a number of joint four-star positions, the most prestigious of which are the chairman of the Joint Chiefs of Staff (CJCS) and the NATO supreme allied commander in Europe (SACEUR). Other joint four-star positions have included unified combatant commanders; certain NATO staff positions; and the wartime theater commanders in Vietnam (MACV), Iraq (MNF-I), and Afghanistan (ISAF/RS). 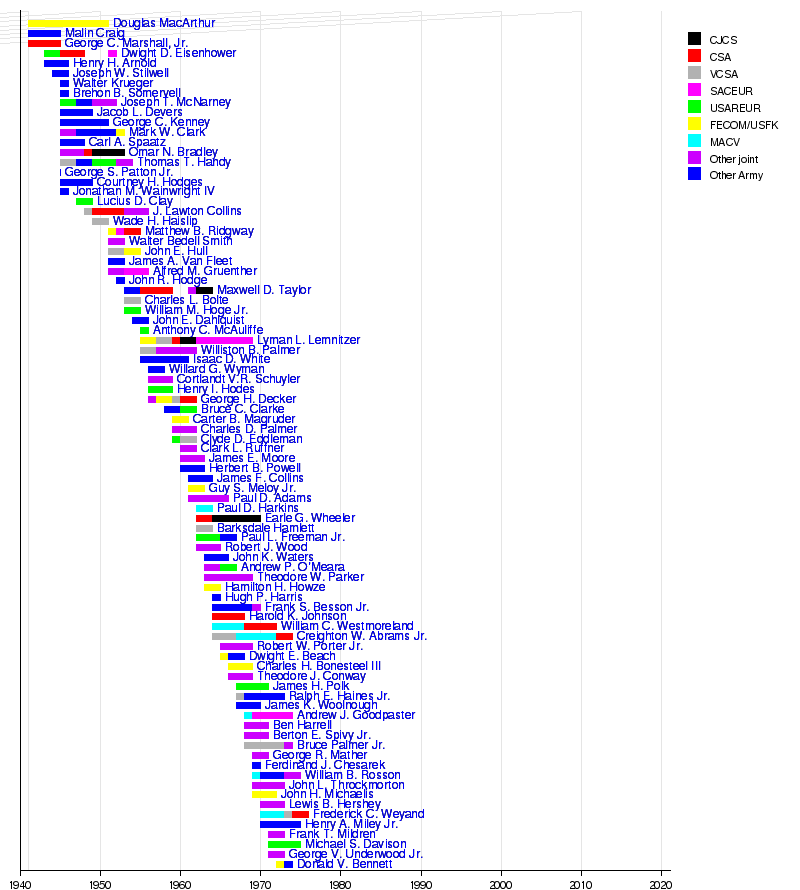 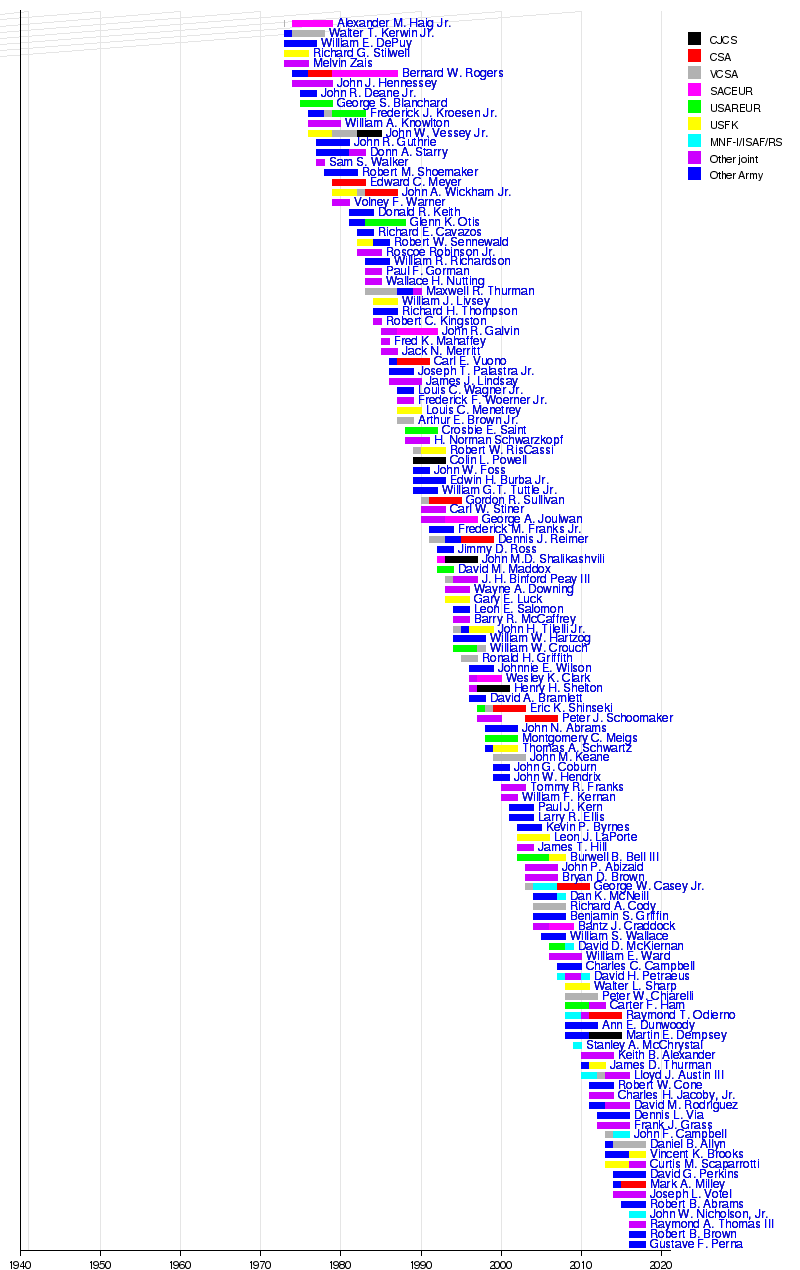 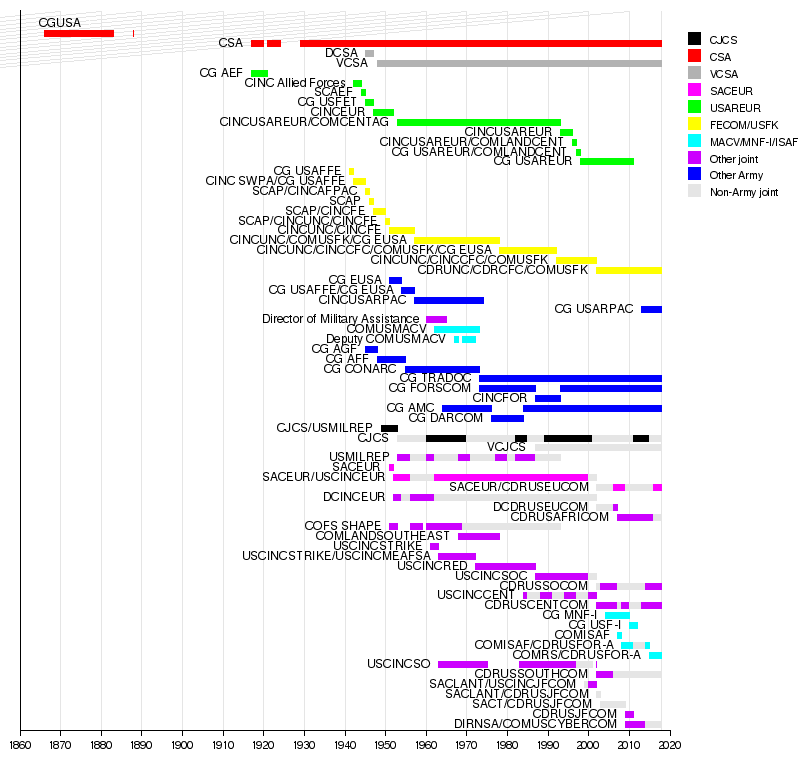