In its early years, the British V bomber force relied on the concept of aircraft dispersal to escape the effects of an enemy attack on their main bases. There were 26 such bases in the late 1950s, in addition to the ten main bases – RAF Coningsby, RAF Cottesmore, RAF Finningley, RAF Gaydon, RAF Honington, RAF Marham, RAF Scampton, RAF Waddington, RAF Wittering (HQ RAF Bomber Command) and RAF Wyton – a total of 36 bases available for the V bomber force.

In times of heightened international tension the V bomber force, already loaded with their nuclear weapons, would be flown to the dispersal bases where they could be kept at a few minutes readiness to take-off, the bases being situated around the United Kingdom in such a way that a nuclear strike by an attacking state could not be guaranteed to knock out in its entirety Britain's ability to retaliate. Apart from deployment to the bases during exercises, the most notably use was during the Cuban Missile Crisis of 1962, when at one point Vulcans were lined up on the runways with engines running, at two minutes notice to take-off and proceed to their allocated targets.

The dispersal bases are mentioned in the opening titles of the 1965 Peter Watkins documentary The War Game. 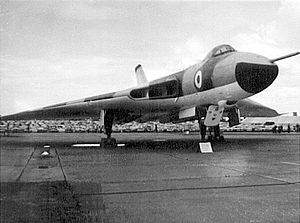