The World Rally Championship (WRC) is a rallying series administrated by Fédération Internationale de l'Automobile (FIA), motorsport's world governing body.[1] The series currently consists of 13 three-day events driven on surfaces that range from gravel and tarmac to snow and ice. Each rally is split into 15–25 special stages, which are run against the clock on closed roads. The WRC was formed from well-known and popular international rallies, most of which had previously been part of the European Rally Championship and/or the International Championship for Manufacturers; the series was first contested in 1973.[2] The drivers' championship was first awarded in 1977 and 1978 as an FIA Cup for Drivers title, to Sandro Munari and Markku Alén, respectively. The first official world champion in rallying was Björn Waldegård in 1979.[3]

Each season normally consists of 12 to 16 rallies driven on surfaces ranging from gravel and tarmac to snow and ice. Points from these events are calculated towards the drivers' and manufacturers' world championships. The driver's championship and manufacturer's championship are separate championships, but are based on the same point system. In the current points system, points are awarded at the end of each rally to the top ten WRC (overall), junior and production car drivers that qualify as follows: 25, 18, 15, 12, 10, 8, 6, 4, 2, 1. Despite how many drivers are in one team, constructors can only nominate two drivers to score points for the team as well as scoring for themselves.[4] 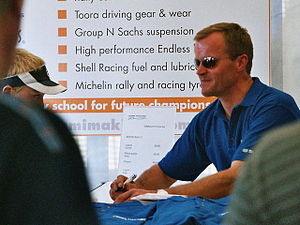 C. ^ Alén drove a Lancia Stratos HF at the Rallye Sanremo and at the Lombard RAC Rally.[10]

D. ^ Waldegård drove a Mercedes 450 SLC 5.0 at the endurance rallies; the Safari Rally and the Rallye Côte d'Ivoire.[11]