From Infogalactic: the planetary knowledge core
Jump to: navigation, search
This article is about winners of the World Series of Major League Baseball that began in 1903. For earlier league and inter-league championships, see List of pre–World Series baseball champions. 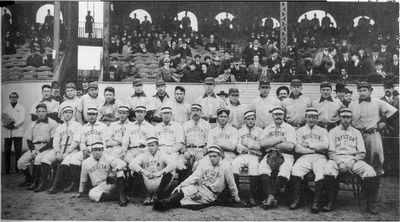 At the first World Series, held in 1903, the Boston Americans (front row) defeated the Pittsburg Pirates (back row) in eight games.

The Commissioner's Trophy, which has been awarded to the winning team since 1967.

The World Series is the annual championship series of Major League Baseball (MLB) and concludes the MLB postseason. First played in 1903,[1] the World Series championship is determined through a best-of-seven playoff and is a contest between the champions of baseball's National League (NL) and American League (AL).[2] Often referred to as the "Fall Classic",[3] the modern World Series has been played every year since 1903 with two exceptions: in 1904, when the NL champion New York Giants declined to play the AL champion Boston Americans; and in 1994, when the series was canceled due to the players' strike.[1][2][4][5]

The best-of-seven style has been the format of all World Series except in 1903, 1919, 1920 and 1921, when the winner was determined through a best-of-nine playoff.[1][2] The Series-winning team is awarded the Commissioner's Trophy.[6] Players, coaches, and others associated with the team are generally given World Series rings to commemorate their victory; however, they have received other items such as pocket watches and medallions in the past.[7] The team that won the World Series in any given year is traditionally invited to the White House to meet the President of the United States.[8]

A total of 111 Series have been contested, with the NL champion winning 47 and the AL champion winning 64. The New York Yankees of the AL have played in 40 of the 111 Series through 2015 and have won 27 World Series championships, the most Series appearances and victories of any Major League franchise. The Yankees have also lost more Series (13) than any other club. The St. Louis Cardinals, who represented the NL for a 19th time in 2013, have won 11 championships, which is the second-most among all 30 Major League teams as well as most among NL teams.[3] Only the Giants have been NL champions more times, appearing in 20 World Series (14 in New York and six in San Francisco), with eight Series victories (second-most in the National League), including their most recent in 2014.

The Seattle Mariners and the Washington Nationals (formerly Montreal Expos) are the only current Major League franchises to have never appeared in the World Series; the Houston Astros, San Diego Padres, Colorado Rockies, Texas Rangers (formerly the 1961–1971 version of the Washington Senators), Tampa Bay Rays, and Milwaukee Brewers (formerly Seattle Pilots) have played in the Series but have never won it. The original Washington Senators, who became the Minnesota Twins starting in the 1961 season, played in and won the World Series in 1924. The Toronto Blue Jays are the only franchise from outside the United States to appear in a World Series, winning in 1992 and 1993.

In the sortable table below, teams are ordered first by number of appearances, then by number of wins, and finally by year of first appearance. In the "Season(s)" column, bold years indicate winning World Series appearances.