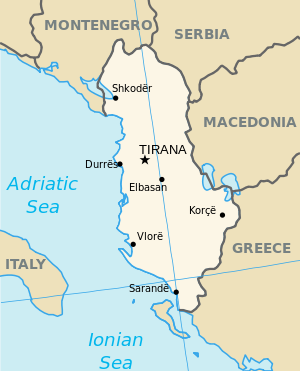 This is a list of airports in Albania, grouped by type and sorted by location.

Albania, officially the Republic of Albania (Albanian: Republika e Shqipërisë), is a country in South Eastern Europe. It is bordered by Montenegro to the northwest, Serbia to the northeast, Macedonia to the east and Greece to the south and southeast. It has a coast on the Adriatic Sea to the west, and on the Ionian Sea to the southwest. It is less than 72 km (45 mi) from Italy, across the Strait of Otranto which links the Adriatic Sea to the Ionian Sea.

A number of regional airports have been renovated but cannot become functional for civil flights as per the 20 years and over monopoly that holds Tirana International Airport's shareholder company over Albanian airspace since 2005. Negotiations have been ongoing to revise the contract terms as to open airports for both domestic and external flights earlier than the above time frame.