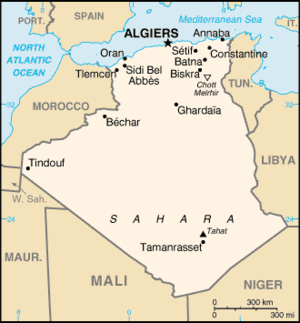 This is a list of airports in Algeria, grouped by type and sorted by location.

Algeria, officially known as the People's Democratic Republic of Algeria, is a country located in North Africa. It is the largest country on the Mediterranean Sea, and the African continent, as well as the tenth-largest country in the world in terms of land area. It is bordered by Tunisia in the northeast, Libya in the east, Niger in the southeast, Mali and Mauritania in the southwest, a few kilometers of the Moroccan-controlled Western Sahara in the southwest, Morocco in the west and northwest, and the Mediterranean Sea in the north. Algeria is divided into 48 provinces (wilayas), 553 districts (daïras) and 1,541 communes or municipalities.